Solar power is being used to run fax machines, computers and telephones 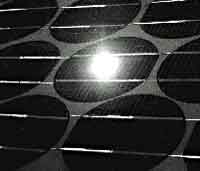 solar power, probably the most abundant natural resource in Rajasthan, is now being used to run fax machines, computers and telephones in Tilonia, Rajasthan. The solar power unit at the social work research centre in the model village generates electricity to meet the requirements of not only the centre, but also villages within a five kilometre radius.

The centre is run by Bunker Roy, chairperson of the Nairobi-based Environment Liaison Centre International ( elci ), a network of 800 voluntary groups. The 10 kw solar power unit provides light to the centre through 350 tubelights. Bhagwat Nandan Sewda, in charge of the unit at the centre, says that it additionally powers more than 17 computers, fax machines, telephone sets, all the equipment in the audio-visual studio, and a pump that lifts water from a 150 feet deep well. Ten panels mounted on the roof of the centre trap the sun's rays and charge a series of 40-watt batteries which supply the power.

The cost of establishing a solar power unit is Rs 20,000, but the expense is largely subsidised by the government. Once installed, the maintenance cost of each unit -- capable of providing three hours of electricity to a village for 10 years at a stretch -- works out to be about Rs 20 per month. The unit also makes solar power lanterns. The seven-watt lanterns can be lit for three hours continuously and require four to five hours of recharging.

More than 700 electronic charge controllers, 2,000 tube-lights and inverters for solar-powered lamps have been assembled at this unit since its establishment in 1987. One person can assemble two solar lanterns a day and each costs Rs 2,500.