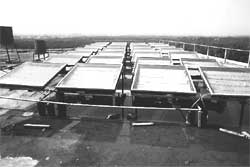 amid growing awareness of the need for environmental protection and energy conservation measures, consumer electronics firms in Japan are lining up to enter the market for solar-power generation systems.

Manufacturers are especially targeting the market for residential solar-power generation systems, encouraged by the Japanese ministry of international trade and industry's (miti) subsidy offer. The number of applications for the miti subsidy offer topped 10,000 in the current fiscal year. The subsidy programme has unearthed latent demand for solar-power generators and sales are projected to reach us $800-$1,600 million by the year 2000.

The Kyoto-based Kyocera Corp has established Kyocera Solar Corp to take charge of this strategy. Sanyo Electric Co has set up Sanyo Solar Industries Co. This new company manufactures and markets solar power generation systems. Sharp Corp, which has expanded its market share by offering low-priced systems, has also started a programme for buyers of solar-power generators. The Matsushita Battery Industrial Co too entered the market last year. It has formed a club for customers interested in solar-power generation systems, providing members with detailed information on the systems as well as comprehensive advice on housing. Omron Corp assembles solar-power generators, using its inverters and peripheral equipment with solar cells supplied by a Tokyo company -- msk Corp. The Kyoto-based control equipment maker joined hands with Misawa Homes Co to have the major house builder handle installation work. The two will also market an upgraded version of the residential-use four kilowatt (kw) system to convenience stores and offices. They expect to see an increase in demand for such systems from companies that want to improve their corporate images by showing their consideration for the environment.

Use of solar energy as a power source is not limited to residential power-generation systems. Kyocera, for instance, has developed and commercialised solar battery-powered illuminating road signs and lane markers as well as underfloor ventilation fans. Japan Storage Battery Co has started marketing solar-powered outdoor light fixtures for public parks. Citizen Watch Co and Seiko Corp have developed wrist watches equipped with solar-cells. Also, Japanese corporations are participating in a project to build a network of solar-power stations dotting the deserts of western China. The programme was drafted by the Silk Road Genesis research panel, comprising six Japanese corporations. Among them are Sanyo Electric, Toshiba Corp and Tokyo Construction Co. The plan envisages the construction of solar-power plants, each with a capacity of 200,000-300,000 kw, at 139 locations. The network will be able to supply about 100 million kw of electricity by 2020.