Solar energy is yet to reach its true potential. Engineers aim at efficiency 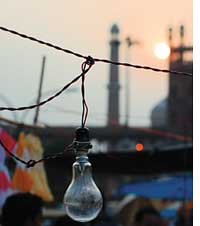 recall the last time power outage hit your neighbourhood just as the temperature soared above 45C? Looking upwards wishing for divine intervention would go in vain. This may change finally. While the sun has been a long delayed answer to energy prayers, that wait is coming to a close as solar energy makes it to mainstream energy production. The credit goes to an assortment of solar cells or photovoltaics (PVs) made from metals and plastic.

Talk about a solar cell and one imagines a gleaming rectangular edificecrystalline silicon cells connected together and mounted on a plastic circuit board. The silicon wafer, sandwiched between two electrodes, absorbs energy from the sun, knocking off electrons and setting off an electric field. That current could run a watch or a satellite, depending on the size of the panel.Bell Laboratories in usa made the first such panel in 1954. Four years after that a satellite fitted with a solar panel went into space. Durable and well-tested, such silicon cells generate much of the worlds installed solar power.

All seems well. The sun rises everyday. Yet solar energy has not been able to dethrone fossil fuels and combat climate change. Why?

Silicon cells are not cost-effective, as yet, when compared to fossil fuels. The silicon needed for such solar cells cost US $450 per kg in 2008. It needs further modification for electrical connectivity and protection. Even before installation, the average cost reaches US $4 per Watt of electricity produced. Coal costs about a dollar or two per Watt that is produced, including installation of a coal power plant and transmission. The writings on the wall Solar energy at less than a dollar per Watt is what is required to give coal competition.

Then there is the question of efficiency the percentage of received energy converted into electricity.

A solar panel receives 1,000 Watts of energy per square metre from the sun. But even an ideal crystalline silicon panel can only convert 30-40 per cent of that energy into electricity. The rest is lost as heat. Commercial silicon cells and panels are about 14 per cent efficient. Such high costs and low efficiency together mean fewer buyers.


Technology set out to reverse the equation between the sun and coal. There was a deluge of improvizations.

Some technologies focus on improving the silicon cells architecture. They increase efficiency by changing the cells surface texture in such a way that light reflects back into the cell instead of getting lost. It can help cut installed costs by 50 per cent to US $2 per Watt, said Craig Lund, director of business development at 1366 Technologies, a company from Massachusetts in usa, that developed this technology.

Others claim to have reached the magic dollar-per-Watt value using second generation solar cells. In these cells, the photoactive layer is a hundred times thinner than a silicon wafer, making the technology flexible. Since it reduces the amount of material used, the cost is much lower. These are made of either cadmium telluride (CdTe) compound or a copper indium gallium selenide ( cigs) sandwich. First Solar, a company from Arizona, is one of the main manufacturers of the CdTe PVs. Their cells efficiency, confirmed by the US Department of Energy, is close to 16 per cent commercially. First Solars solar panels deliver at about 83 cents per watt, with a lifespan of 10 years, at least.

But the problem is far from solved. Cadmium is a restricted metal, and one of the six hazardous materials banned by the European Union. It has been linked to lethal kidney diseases. Safe packaging and recycling of cadmium is possible but that brings one back to square one in terms of money.

cigs -based photovoltaics are not targeted for their toxicity. None of the constituent materials are in the EUs restricted list but the technology using cigs is complex. The photoactive material here is a mixture of cigs nanoparticles dispersed in printable ink. The resulting layer is 1/10,000 the breadth of hair and 20 times thinner than CdTe. The photovoltaic cells are printed on rolls of aluminum, like paper in a printing press. We have breached the US $1 per Watt mark because of our innovative printing process, said R Martin Rocheisen, the chief executive officer at Nanosolar, a company in California. Nanosolars cells reached 16.4 per cent efficiency in the lab.

Developers building such low-cost solar cells have an eye on large markets like India. The Indian government intends to install 20,000 MW solar power plants by 2020, with a budget of US $19 billion.

But the larger question without a clear answer is Are these low-cost cells practical for India?

Rocheisen is convinced of Nanosolars grip on Indian markets. Power plants installed with cigs thin films will be reliable producers of energy for small communities like villages by reducing costs of transmission substantially, he said.

Other scientists in the field are not as confident about the materials used to make these cells. Cyrus Wadia, visiting scholar at the Lawrence Berkeley National Laboratory in usa, published a study of over 20 materials in a February 2009 article in the Journal of Environmental Science and Technology.

Wadia and his co-researchers analyzed materials like iron and copper sulphides which Wadia pointed out are abundant and have little toxicity. These sulphides, though, are in early research. Wadias team converted only 1.6 per cent of light falling on an iron sulphide sample into electricity. I look at the energy situation from two perspectives what can reach the rich, and what is likely to affect the poor, he explained. I do not believe that the production of any of the materials in use currently can be ramped up to a significant level to reach an actual cost of about 75 cents per Watt, which is possibly the maximum a farmer in China can think of spending on electricity.


Polymer cells are another field where engineers are researching. We want to revolutionize the way people think about power by taking solar energy to areas never explored before, said Dan Williams, vice president at Konarka in Massachusetts in usa. Konarka is a company that prints its solar cells, made of organic materials, on flexible plastic. The product is also in the dollar-per-Watt range, Williams assured.

To increase the efficiency of such polymer cells, scientists at Ohio State University in usa inserted small silver particles into the polymer. When measured without silver particles, the cells generated 6.2 milliamps of current per square centimetre. With silver, they generated 7 milliamps, a jump of about 12 per cent. But this increase in current may not necessarily mean increase in efficiency which is decided by several factors. Paul Berger and his team published their findings in the October issue of Solar Energy Materials and Solar Cells.

Some researchers doubt the efficacy of the new materials and the technologies. I dont think any of the new technologies are anywhere near as reliable as silicon, said Gerald Meyer, professor of chemistry at the Johns Hopkins University in usa, who works on photovoltaic materials. They are also unli-kely to compete with fossil fuels, unless there is some breakthrough in research, he added.

Still, researchers are hopeful of the sun reaching its true potential some day. If each building is covered with solar panelswe are working on transparent ones for windowsit might reduce the use of fossil fuels, said Williams.

With inputs from Venkat Srinivasan