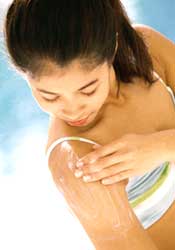 beware the next time you use a cosmetic product to protect the skin from the sun. According to a us study, nano-particles of titania (titanium dioxide) used in some sun creams can damage brain cells. Led by Bellina Veronesi of the National Health and Environmental Effects Research Laboratory of the Environmental Protection Agency, the study was published online on June 7 in Environmental Science & Technology.

The researchers studied the effect of titania nano-particles on culture of mouse microglia. Microglia are specialised cells that protect the brain from invading microbes or foreign particles by engulfing them. The cells then release 'free radicals' known as reactive oxygen species (ros) to burn up the invading substance. The researchers found that the titania particles provoke the cells to manufacture and release ros in a prolonged manner. Though protective in the short term, ros released in a sustained manner could subject the brain to oxidative stress -- thought to be the cause of diseases like Parkinson's and Alzheimer's.

Hundreds of nano-particle containing products are released in the market every day and it is assumed that they will be safe because larger grains of those chemicals are safe. But this assumption cannot be taken for granted, warn scientists (see ' No small matter,' Down To Earth, June 15, 2006). On the other hand, it should not be assumed that all nano-particles used in consumer products such as toothpastes and cosmetics are harmful.

Titania is the white pigment used in paints, and is generally considered non-toxic. It has long been used in many sun creams because of its ability to absorb ultraviolet light and appear transparent rather than white.

Scientists, however, warn that nano-particles may travel around natural environments, including the human body, in ways different than bigger particles do and may even enter the brain from the bloodstream. They say that risk from such particles should be assessed as if they were new chemicals.