After all these years, science finally creates superconducting transistors 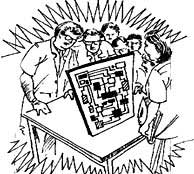 if there is one device that has truly revolutionised our lives, it is the transistor. Since its invention in the late 1940s, this device has made the entire microelectronics revolution -- and later the information revolution -- a reality. One of the dreams of scientists has always been the development of a superconducting transistor.

In the 1980s, a lot of research was done in this particular field, and attempts made to develop a particular kind of superconducting transistor based on structures called Josephson junctions. However, these were not very successful.

Superconductors are essentially materials that offer zero resistance to the flow of electric current. Thus a device that is a superconductor will have the advantage over the conventional devices because it would run faster and would not overheat. The basic idea behind the new device is to use two superconducting metals separated by a thin gold layer about 0.1 micrometre wide. The current (called supercurrent) flows from one superconductor to the other through the gold layer. Since the layer is conducting, electrons move through the gold without any complication.

However, the twist is that one can supply another current flowing perpendicular to the current from one superconductor to the other. This current, applied to the gold layer, can control the flow of the supercurrent due to the interaction of the electrons in the gold layer. This controlling feature is characteristic of a tuneable device or a transistor.

Though the performance of the experimental device is still quite poor as compared to the best conventional devices available, the researchers claim that the switching speed of their device is about 10 picoseconds (one picosecond equals a thousandth billionth of a second).

Though no one believes that these superconducting transistors will replace their conventional cousins, there is still hope that the new approach would ultimately lead to devices that will prove useful in special fields such as extremely sensitive magnetic detectors.