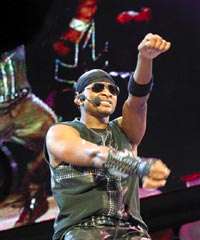 To mark the occasion of World AIDS Day on December 1, MTV organised concerts at Cape Town, South Africa and Seattle, USA, featuring well-known performers such as Puff Diddy, Alicia Keyes and others.

The show was broadcast on global MTV channels and on more than 60 additional broadcasters to promote HIV/AIDS awareness.

The televised event included an exclusive message from former South African president Nelson Mandela on fighting the stigma and discrimination associated with the dreaded disease.

On the same day, MTV channels also premiered the documentary Staying Alive 2002, the fourth in a series on youth and AIDS. The documentaries showcase the lives of young people in various parts of the world infected by AIDS. A new documentary is premiered every year on World AIDS Day. This year's documentary was hosted by soul singer Mary J Blige.