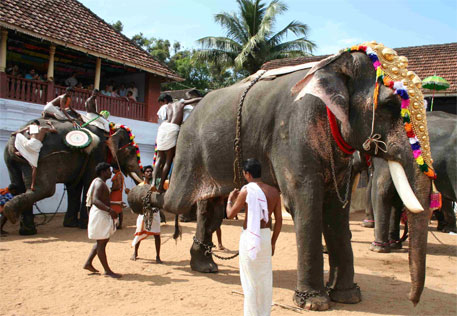 The Supreme Court of India on April 24 sought responses from the Centre and nine states on a petition seeking a ban on elephant trade and strict implementation of rules on welfare of captive elephants in the country. The states are Karnataka, Kerala, Tamil Nadu, Andhra Pradesh, Telangana, Bihar, Uttar Pradesh, Punjab and Haryana.

A division bench of the apex court issued notices to the Central and state governments based on a public interest petition filed by a Bangalore-based non-profit called Wildlife Rescue and Rehabilitation Centre. The bench asked them to respond to the petitioner's queries on the number of captive elephants in these states with the forest department, zoos, circuses, private individuals, temples and religious institutions.

The petitioner pointed out that even as the Wildlife (Protection) Act, 1972, prohibited the transfer of captive elephants by sale or on rent or for any commercial consideration, the law was flouted with
impunity. At the famous annual Sonepur Mela in Bihar, elephants are openly bought and sold in violation of the law, says the petition. The “Gajah” report of the Elephant Task Force of the
environment ministry also identifies Sonepur Mela as “a hub of captive elephant trade in India” and recommended steps against such trading.

The petition states that captive elephants are subjected to cruelties and are living in extremely stressful surroundings, mentally as well as physically. Elephants participating in festivals are forced to walk and stand for hours in chains in simmering heat and noise. They are not provided adequate food, water and rest. "The abused elephants often turn violent, particularly when exposed to crowds, leading to death and injury of their mahouts and bystanders,” says the petition.

The petition highlights the situation of captive elephants in Kerala during the festive season from November to May. In this season, captive elephants are in high demand in the state, where the rent ranges from Rs 35,000 to Rs 50,000 per day for an ordinary elephant. A “star” elephant could fetch up to Rs 1 lakh per day in rent. "This monetary compensation through renting out of the elephant is completely illegal," says the petition.

Report of the Karnataka Elephant Task Force: submitted to the High Court of Karnataka

Gajah: securing the future for elephants in India - the report of the Elephant Task Force

Captive elephants of temples of India