Colony land, meant to be a temporary habitation, had been affecting movement of animals in the forest 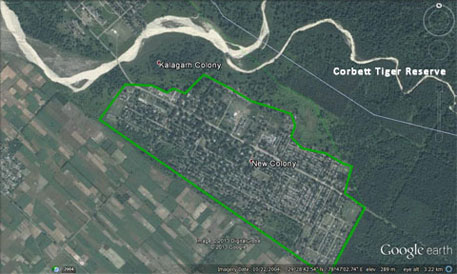 The Supreme Court has ordered the eviction of 784 families living in a colony on illegally occupied land inside the Corbett tiger reserve. These families have been living in the New Kalagarh Irrigation Colony which falls within the southern part of the reserve. The colony was meant to be a temporary habitation for the duration of the construction of a hydel project and was to be returned to the forest department.

The Uttarakhand government has been given six months to implement the order.

The order on Tuesday was in response to a petition filed by Wildlife Trust of India (WTI), a non-profit that works on conservation-related issues. According to the petition, the land was temporarily handed over to the irrigation department in 1966 for use during the construction of the Ramganga Hydel Project in the then undivided Uttar Pradesh.

The petition says that the land was handed over only on the condition that it will be returned to the forest department once the project is completed. It was also agreed that all structures for housing the workers and staff will be made of mud and no cement mortar will be used so that they can be easily demolished later. “But, after the completion of the project, the houses were occupied illegally by outsiders as the staff had left the place,” allege the petitioners.

When the legality of the colony was first challenged by WTI in Allahabad High Court in 1999, the court had ordered that all encroachments in the area must be removed by December 15 the same year. But the order could not be implemented because the state was bifurcated into Uttar Pradesh and Uttarakand, with the dam going to the former and the colony going to the latter.

In 2003, an application for removal of the colony was heard by the Central Empowered Committee (CEC), which advises the Supreme Court on forest-related issues. After inspecting the site, CEC, in 2004, recommended removal of all encroachments within three months. It also recommended that all non-essential facilities like the Engineer’s Academy and other structures should be relocated to places outside the reserve area within six months. Demolition of walls, fencing around the colony to ease movement of animals and relocation of all non-essential operational staff outside the national park within six months were a few other suggestions made by CEC. The matter, however, was not resolved till now.

In its order earlier this week, the apex court has upheld the CEC report and rejected an application filed by the state government to retain the Engineer's Academy inside Corbett.

Welcoming the judgement, Ashok Kumar, vice-chairperson of WTI said, “Movement of elephants in the forest has been hit by the dam’s construction as there is not enough room for them to move. With this judgement, the right of passage may finally be restored to the elephants and the wildlife of the area.”