Directs Centre, states to treat them as socially and economically backward community for the purpose of social welfare schemes 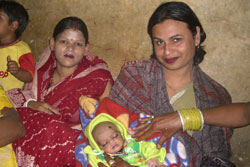 Transgender people will no longer have to compulsorily term themselves as male or female for getting government benefit. In a landmark ruling on Tuesday, the Supreme Court of India created the "third gender" status for them.

Not only this, the court also directed the central and state governments to treat transgenders as socially and economically backward. In its ruling on a petition filed by the National Legal Service Authority (NALSA), the court said that transgenders should be treated as backward in social welfare schemes.

NALSA had filed the petition in Supreme Court in 2012, requesting equal rights for the group, highlighting the discrimination they face even in hospitals.

As per the court order, absence of any law which recognises transgenders as third gender could not be the ground of any discrimination in education or employment.

The apex court ordered government at the Centre and state level to chalk out social welfare schemes for this community and also to run a campaign to improve awareness in the society. This awareness will be aimed to erase the stigma regarding third gender community.

In its order, the court also stated that state governments must construct special facilities like public toilets and departments to look into the special medical issues for the transgender community. The decision is likely to prompt authorities to set up special facilities for transgenders in hospitals also. NALSA had highlighted the plight of transgenders in hospitals where women patients feel uncomfortable when they get admitted in female ward. The transgenders, on the other hand, face harassment and other problems when they get admitted in the male ward.

Counsel for National Legal Service Authority (NALSA), Rajeev Yadav, said that almost all prayers made in the petition have been granted by the court.

Expressing her happiness, Simron Sheikh, who comes from same community said that the new order has also legalised gender change if a persons wants to change his/her sex through surgery, and that such a person will not face any discrimination on this ground.

For obtaining identity card like driving licence, voter id, people are required to check boxes against male or female category. They will get a separate option, Sheikh said.

Former Election Commissioner S Y Quraishi tweeted, “When EC recognised transgender as the 'other' gender besides M & F, one million of them got empowered. SC has endorsed it.”