The Supreme Court has refused to vacate the stay granted by the Andhra Pradesh High Court on sand mining in the state. While considering a bunch of special leave petitions (SLP) moved by the state government and others, the apex court directed the state government to approach the Union Ministry of Environment and Forests (MoEF) to get clearance for sand mining in accordance with the EIA (Environmental Impact Assessment) notification.

The Andhra Pradesh government on May 7 pleaded before the Supreme Court that it was losing revenue due to ban on sand mining and several welfare schemes had been facing financial crunch. Among others who moved the petitions against the high court ruling were: the Builders Association of India, the Builders Welfare Association, the SEW Infrastructure Ltd and Nagarjuna All Castes Coop Society Ltd. The appellants contended that the ban on sand mining has adversely affected several ongoing infrastructure and irrigation projects. Refuting this argument, the apex court expressed serious concern over the activities of the mining mafia, and referred to the killing of an Indian Police Service officer, Narendra Kumar, by mafia in Madhya Pradesh two months back. 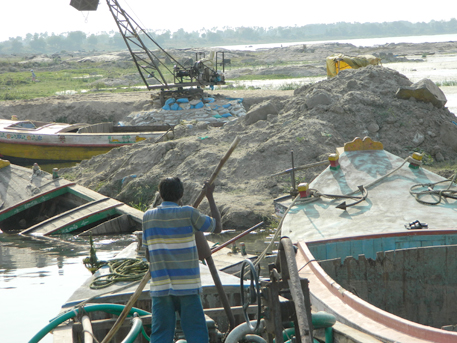 The apex court rejected all these pleas and said that the MoEF had been asked to dispose of the applications filed by the Andhra Pradesh government to get clearance for sand mining in various rivers across the state within three weeks. On February 27 this year, the Supreme Court
had ruled that leases of minor mineral including their renewal for an area of less than five hectares, too,be granted by the states and Union Territories only after getting environmental clearance from MoEF.

The Andhra Pradesh High Court on March 21 stayed sand mining and auction of sand reaches in the state in an interim order on a public interest litigation (PIL) filed by Annam Sivaiah and K Koteswara Rao, two farmers from Dharanikota village in Amaravati mandal in Guntur district. The petitioners had pointed out that there was a strong contactors-politicians-bureaucrats nexus allowing illegal sand mining.

The stay came into force on April 1 and despite relentless efforts by the state to get the order vacated, the high court made it clear that it would not go against the directives issued by Supreme Court.

However, on April 20, the high court modified its ban order and permitted state-owned Andhra Pradesh Mineral Development Corporation to supply sand to certain contractors who have taken up works on irrigation canals.