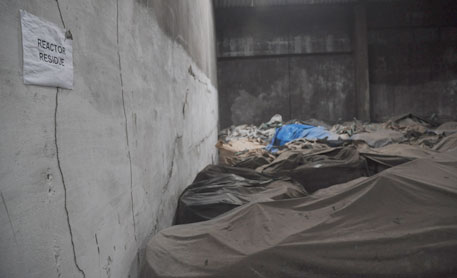 Calling the Centre “apathetic” towards dealing with the toxic waste lying at the Union Carbide factory for the past 28 years, the Supreme Court has asked the government to take a decision on it soon.

The bench of justices G S Singhvi and S J Mukhopadhaya made the observations on May 28 while hearing a special leave petition. The petition was filed by the Centre government challenging a Madhya Pradesh High Court order demanding the principal secretary of Union Ministry of Environment and Forest to appear before it.

Earlier, on May 10, the apex court had asked the Centre government to submit a detailed affidavit by May 28 regarding the plan for disposing the hazardous waste. The affidavit submitted by the Centre was termed “vague” and the bench was disparaging of the government’s uncertainty and inaction on waste disposal. On the other hand the government contended that they were doing all they could and the delay was happening as “the disposal of this waste is a highly emotional and politicised matter”.

The contentious issue of disposal

Since 2004 there have been four proposals for incineration of the toxic waste but no consensus has been arrived over the same. A proposal to dispose the waste at a site in Gujarat was opposed by the state pollution control board. Last year it was mooted that the waste be sent to Nagpur  and then Navi Mumbai  was touted as an option. Supreme Court had on April 4 ordered to dispose the waste at Pithampur plant in Dhar district of Madhya Pradesh. But it had to stay the order on May 10 after stiff opposition from activists and the state government.

Rachana Dhingra  of non-profit, Bhopal Group for Information and Action, says, “It has almost been three decades and neither the state nor Central governments have taken a holistic approach to the problem. It seems the court is taking a keen interest on ensuring the waste is disposed properly.” She adds, “But we want the government to hold Dow Chemicals liable and ensure remediation and not just remove this 350 tonnes of waste.” Five non-profit organisations working on Bhopal have submitted a roadmap for a thorough clean-up of the area  and proposed that Dow Chemicals pay for the clean up. Union Carbide is a subsidiary of Dow Chemicals though both companies have denied the link. “The 1984 accident continues to be a reality for the residents even today. Contamination and hazards of the waste lying unattended at the site are far reaching and are yet to be properly surveyed and recorded,” says Dhingra.

Waste to be incinerated in Germany?

Earlier in the month the Group of Ministers regarding Bhopal gas leak disaster had met and claimed to have “in-principle” approval from the concerned departments for the disposal of the waste in Germany.

According to the Central Pollution Control Board (CPCB), a German public undertaking company GIZ, has offered it to burn the waste in the country. The German company visited the Bhopal site in May and is scheduled to submit a detailed project report on the method, cost and timeline for the waste disposal in June.

The Group of Ministers are scheduled to meet again on June 8 and take a final call on the issue. But CPCB says, sending the waste to Germany is “just one of the options”. Vinod Babu, head of CPCB’s hazardous waste division says, “We are trying to ensure that our own capabilities and technology can deal with the disposal of this hazardous waste.” Unhappy about accusations of inaction he adds that work is underway and institutes like the National Environment Engineering Research Institute have been sanctioned to carry out studies on the contamination in the area and propose solutions for remediation. Centre also has to identify a laboratory to analyse toxic waste from Union Carbide factory.