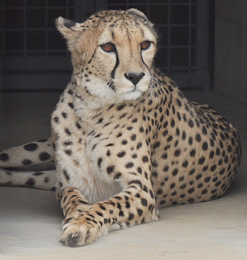 The Supreme Court has stayed the Centre’s ambitious cheetah re-introduction project. The project initiated by the Union Ministry of Environment and Forests in 2010 aimed to bring the cheetah, which became extinct from India’s forests in 1952, back to the country.

India was once home to many cheetahs, the fastest running animals, but the last of them was killed in 1947. The ministry had planned to re-introduce the carnivore in the Kuno-Palpur sanctuary in Madhya Pradesh after importing it from Africa. The court observed that the programme was misconceived. It was brought to the notice of the court that project has never been referred to the National Board of Wildlife, the statuary body of the ministry which makes recommendations on matters related to wildlife.

The matter came to light while court was hearing a petition related to the relocation of Asiatic Lions in Kuno-Palpur Sanctuary of Madhya Pradesh from Gir National Park in Gujarat. The Central government had decided to relocate the lions, which exist only in Gir and number over 400, to Kuno-Palpur in the 1990s as fears have often been expressed that high rate of inbreeding and less genetic diversity may make the Gir lions highly susceptible to epidemics.

The Gujarat government, since then, has been opposing the move and the matter was brought to the court. In July 2010, the then environment minister Jairam Ramesh had announced that since Kuno-Palpur had received substantial investment from Central and the MP government for village relocation and prey-base improvement, the cheetah would be re-introduced in the sanctuary pending the relocation of lions.

The ministry claimed the decision was taken after conducting feasibility studies at various sites in the country. The Gujarat government had argued in the apex court that lion relocation should be put on hold as wildlife experts have stated on record that cheetahs should be introduced first in Kuno for better chances of their survival.

“Twenty years have passed but the lion relocation project could not take off due to stubborn nature of Gujarat government. With cheetah re-introduction, the case of lions would have gone for a six. Now, with the court stopping the cheetah project, we hope the lions could be secured which might be under severe threat concentrated at one location,” says a senior advocate associated with the case.