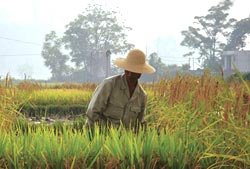 death stalks the workers of the International Rice Research Institute (irri) in Philippines. Because more than four decades of experiments and intensive studies have let loose a toxic trail. This alarming revelation came recently after an independent medical survey was conducted on former employees of irri. Several instances of fatalities and illnesses due to exposure to pesticides and chemicals surfaced among past and present workers of the institute, which is regarded as a premier rice research body. The findings are all the more unpalatable for irri since it was established to "help poor farmers in developing countries grow more rice...using less water...and fewer chemical inputs". Expectedly, the results have caused a huge public outcry.

The Pesticide Action Network (pan), Philippines, comprising anti-pesticide groups, joined hands with the Institute for Occupational Health, Safety and Development, a public health body, to conduct a comprehensive health check-up of 88 ex-workers of irri. The exercise spanned a period of six months during 2000. It is said to be the first independent health study of the employees. The irri does carry out an annual medical examination of its workers. But it has been cagey about the findings, so much so that even the workers have been kept in the dark.

Romeo F Quijano of pan and Sampaguita Quijano from the University of Philippines' department of pharmacology and toxicology conducted the survey on irri's former employees. It was carried out in Los Baos and Bay where most of the ex-workers are settled.

Not only does it highlight the extent of illness among workers but also the irri's inability to spread awareness among them about the side-effects of pesticides and chemicals. According to the study, about 78 per cent of those tested were directly exposed to pesticides in the field and almost 60 per cent of them were ignorant about the hazards the substances pose to health.

Moreover, the employees were not consulted before being assigned jobs that involved direct exposure to pesticides and chemicals. Though only 53 per cent were recruited to work in farms where the risk is higher, all of them were subsequently given field jobs.

Over 62 per cent respondents reported a rash of heath problems such as headache and chest pain. Close to 66 per cent revealed that they were suffering from serious illnesses. Significantly, about 90 per cent of them did not have any major health problems before joining the organisation.

Though pressure groups have linked the deaths of several workers to pesticide and chemical poisoning, there is no concrete evidence to prove this theory. "Verification is possible only if further scientific check-ups are conducted and irri makes its reports public," avers Rafael Mariano of Kilusang Magbubukidng Pilipinas (kmp), a farmers' body. The fatal diseases that have come to light are mostly neurological and kidney-related. But the recent death of an ex-worker from leukaemia has also been certified as a work-related disease. Twenty-three per cent respondents said their children had abnormal births.

In the wake of these allegations, irri launched a campaign last year to reduce the use of pesticides in rice production. It tried to drive home the point that the value of crops lost to pests is lower than the cost of treating diseases caused by pesticides. But according to anti-pesticide groups, the drive was a desperate cover-up bid.

Meanwhile, the only official response to the study remains a press release circulated last November which said: "We don't impose pesticides on people." Down To Earth's numerous attempts to elicit a response from irri proved futile. The indifference of the rice research body can be traced to a decree issued in 1979 by then President Ferdinand Marcos, granting it immunity from litigation. In November 2002, the Philippines house of representatives' committee on labour and employment got a rejoinder contesting the decision from the Brotherhood of irri Support Services Group -- a workers' group.

Now pan and kmp are also demanding that this special status be scrapped so that irri can be held accountable. Farmers' groups and ex-employees, too, are petitioning President Gloria Macapagal Arroyo. " irri has not been held responsible for the deaths of at least 215 former workers and other members of the community since 1975," alleges Jun Layosa, an ex-worker who is now travelling to other Asian countries to garner support against the institute.

The irri is as yet unaffected by the controversy. Its goof-ups have so far been drowned by hundreds of feel-good stories. In fact, its work on high-yield varieties of rice is said to have played a key role in the Green Revolution also.

But the organisation is finding it increasingly difficult to keep its reputation intact, what with there being more skeletons in the closet. Of late, activists have succeeded in halting or even shutting down its projects. They have also blown the lid off its hidden corporate agendas. Time to eat humble pie?