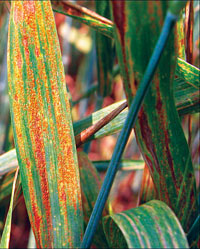 AGRICULTURE experts from various countries gathered at St Petersburg in Russia on May 30-31 to strategize how to combat wheat rust diseases threatening the world’s food supply. Syria said 80 per cent of its wheat fields are infected by stripe rust.

The disease, caused by Puccinia striiformis, begins in small patches that are difficult to detect and spreads rapidly, wiping out an entire crop. First detected as an infection on barley in USA in 1991, the fungus has since appeared as a major wheat rust, affecting America, East Asia, South Asia, East Africa and Oceania.

Scientists have failed to check the spread because every time they develop a resistant variety and fungicide, the fungus manages to outwit them. “Two features of the fungus underpin its success,” said Colin Wellings, agriculture scientist at the University of Sydney in Australia. “Survival between cropping seasons and adaptation to resistant wheat varieties.”

Pathologists from the Agricultural Research Service at the University of Minnesota, USA, recently unravelled how the pathogen is so adaptable and virulent. Contrary to the understanding that P striiformis spreads through asexually produced spores, they showed the fungus uses a wild evergreen shrub, barberry, as surrogate host to reproduce sexually and mould into a virulent variety.

Barberry also ensures the fungus survives even after the infected wheat plants are removed from the field and infects the next crop, they said. To understand the lifecycle of P striiformis, the researchers infected barberry plants by exposing them to infected wheat straw. After a few days, they examined the infection on barberry.

Lead author of the study Yue Jin said in wheat fields surrounded by barberry plants, reshuffling of virulence genes during sexual reproduction likely contributes to the variability of the pathogen by generating new races that can infect resistant wheat varieties and survive fungicides.