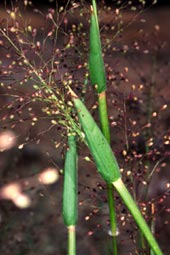 researchers have found a fungus and a plant that can thrive in temperatures more than 50c, but only if they function symbiotically. The two grow around hot springs in the Lassen Volcanic and Yellowstone National Parks of the us. The find may hold clues to how plants adapt to extreme environments.

Biologists Regina Redman of the us-based University of Washington and Joan Henson of Montana State University examined 200 samples of Dichanthelium lanuginosum -- the plant -- for fungal colonisation. They found a new species of the fungus curvularia, which survives only in temperatures greater than 98c.

According to the researchers, the plants' heat-tolerance occurs through a 'fungus trigger' that tells them to react to temperature changes more rapidly or strongly than plants that lack the fungus. On the other hand, plants provide thermal protection to the fungus by isolating it in their roots. Some experts opine that the fungus might be dissipating the heat away from the plants along their network of cells, or the two organisms might be exchanging protective chemicals.