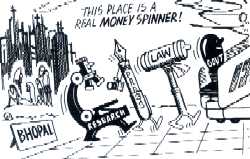 Nine years after the world's worst industrial accident, an international team of 15 doctors and researchers arrived in Bhopal. Their objective: to "provide consultative support towards the Bhopal survivors' long-term medical care, health monitoring and attribution of their health problems to the exposure". The findings of the team, led by Rosalie Bertell, president of the International Institute of Concern for Public Health, are expected to help survivors of the gas leak disaster get their compensation.

Says Bertell, who has worked with survivors of various disasters, "In Bhopal, there is an over-emphasis on pieces of paper as proof for damages." Most of the people affected by the lethal gas leak are poor illiterates who cannot produce the required records. Says C Satyamala, an Indian member of the team: "We will work out a strategy to assess the injuries from the long-term effects of the gas." Satyamala adds the team will also assess the economic impact of the underprivileged survivors' health status and explore possibilities of economic rehabilitation.

The team's report is expected to be released in December 1994, to coincide with the 10th anniversary of the tragedy. Bertell says it will have international ramifications because "we seek to codify an international law to prevent such disasters. The matter will be taken to the International Court of Justice and the United Nations Commission for Human Rights."