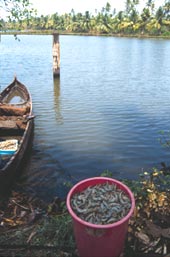 the European Union (eu) has placed shrimp consignments from India on the watchlist after finding traces of lethal antibiotics such as chloramphenicol and nitrofuran in them. The recent move follows repeated warnings from the eu to ban all imports of shrimps from India tainted with high doses of antibiotics.

The eu has also issued a statement recently that any seafood consignments found positive for banned antibiotic chloramphenicol will be destroyed completely. It has also stopped shrimp exports from China and Thailand as traces of such drugs were found in their consignments. In a similar case, consignments of Chinese honey were seized by the us customs service on account of testing positive for chloramphenicol. Similar contamination of honey has been found by food inspectors in Canada, Germany and Britain. The permissible limit for antibiotics set by the eu is 0.1 parts per billion.

Shrimp cultivators in India regularly use antibiotics to treat bacterial, fungal and viral diseases in shrimps. But the ignorant farmers release the antibiotics in the water, which has little possibility of reaching the diseased parts of the shrimps. "Traces of the antibiotics remain as it is difficult to remove them, both from the shrimps and the water," says Vijaykumar C Yaragal, trade officer, Marine Product Export Development Authority (mpeda), Union ministry of commerce. The antibiotics, he says, can accumulate in human bodies having long-term effects on the health. Experts point out that while chloramphenicol is known to cause anaemia, nitrofuran is carcinogenic.

"Farmers have a misconception that antibiotics can cure infection in shrimps and hence they use it indiscriminately. The best option for them is to isolate the infected shrimps," says K Devadasan, director of the Chennai-based Central Institute of Fisheries Technology (cift).

Ironically, though the nodal authorities seem to be aware of the measures to treat diseased shrimps, they have been unable to put across the message to the farmers. But the eu's move to place India on the watchlist may have come as a wake-up call, what with the authorities gearing up to improve the quality of shrimps in India.

Besides conducting regular inspections of the consignments, the cift is also in the process of procuring sophisticated instruments to detect even minute antibiotic residues. mpeda, in association with Sea Exporters Association of India Limited (seal), is also launching campaigns to educate farmers on the minimal use of antibiotics.

There is no gainsaying the fact that adequate steps need to be taken by the authorities to prevent the rejection of exports from India. More so since the livelihood of about .02 million shrimp cultivators in the country is at stake.