...in utter neglect - the state of state pollution control boards 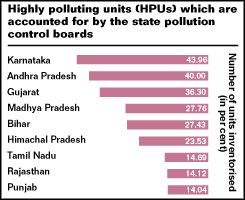 • India generates about five million tonnes of hazarduous waste. But systems to manage it are non-existent

Boards fail to even list the guilty, leave alone penalise

• In Assam, Himachal Pradesh and Bihar about 50 per cent of the industries with the ETPs do not comply with prescribed standards

Who sleeps on these pollution control boards?

Composition of some state boards

Expenditure on training spent during the eighth plan

• The Sikkim board, which is without a chairperson, has 14 members. Eight of these are from bureaucracy, four are panchayat members and one is a retired teacher