Swallowing a live fish may get rid of asthma 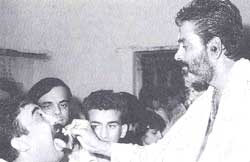 SUFFERING from chronic asthma? Try swallowing a live fish and you may never wheeze again.

For more than 150 years now, thousands of people have been gathering once every year in a bylane in the old city of Hyderabad, to avail of a secret herbal medicine that is placed inside a live murrel fish and administered on Mrigasira day, which falls in June and marks the beginning of the monsoon according to the Hindu calender.

On June 8 this year, the five Goud brothers -- Shiv Ram, Somalingam, Vishwanath, Harinath and Uma Maheshwar -- who were given the recipe for the medicine by their forefathers, administered it to about 125,000 people from across the country and even abroad, gathered at their ancestral home in Doodbowli, Hyderabad. One of the Goud brothers claims even the late Indian President Rajendra Prasad tried their medicine.

However, allopathic doctors, medical researchers and even Ayurveda experts are sceptical of the cure. The president of the Asthma Bronchitis Foundation of India at New Delhi's National Chest Institute, Prem Sobti, says, "I doubt if there is any scientific basis for this alleged cure."

A senior medical researcher, based at the Capital's Patel Chest Institute, however, is not as dismissive. He points out, "More than 80 per cent of all bronchial asthma cases are psychosomatic at some time or the other, and all kinds of unlikely things have been known to help patients. I would reckon that just the fish, even without the herbal medicine, would work."

H R Goel of the Central Council for Ayurveda and Siddha rejects the fish cure as folk medicine and says there are no references to the cure in the Ayurveda scriptures. "Moreover," he adds, "no studies have been undertaken by the Council to determine the efficacy of the treatment."

A C Das, an ENT specialist in Guwahati who has been suffering from asthma patient since the last 12 years, says, "I have taken this medicine for four years, and I am now completely cured. It is really a miracle medicine for asthma."

Sreedevi, a patient from Madras, recounts, "I have had serious spells of asthma for the last four years. I've tried allopathy and homoeopathy, but they only provided temporary relief. I lost my appetite and I was depressed, but after taking the fish medicine this year, there was a visible change within 24 hours."

The patient is made to swallow the live murrel fish, which measures about 4-6 cm in length. The Goud brothers contend it cleans the throat and air passages as it travels down to the stomach, where the herbal medicine begins to work its magic. Shiv Ram claims the medicine is effective in 90 per cent of the cases if taken for three consecutive years in conjunction with a strict diet.

Though the medicine itself is administered free of cost, the patient has to buy the murrel fish, which costs between Rs 20 and Rs 50 a piece, from the local market. Murrel is a freshwater fish found in the coastal districts of Andhra Pradesh and is available in plenty on Mrigasira day.

For people who cannot swallow the live fish, the brothers also offer the Karti medicine, which is in the form of a paste. It has to be dried in the sun by the patient and split into six pills, which should be taken in lukewarm water, before breakfast and after dinner on three special days called kartis -- Arudra, Punarvasu and Pushyami - Occure 15 days apart.