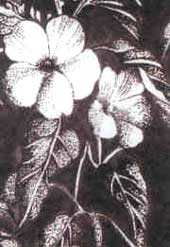 THE spread of a weed called Ipomoea carnea in the Cauvery basin is obstructing water flow and posing a threat to agricultural production. The weed has covered the entire stretch of Cauvery - from Coorg district, the birth place of Cauvery in Karnataka, to Nagapattinam district, where it enters the sea in Tamil Nadu. This drought-resistant and flood-tolerant green plant spreads much faster than other weeds such as Parthenium (congress grass) and nut grass. It obstructs water flow and causes water logging and consequently affects agriculture. At present, the weed is threatening about 10 lakh hectares (ha) of land along the fertile Cauvery delta.

Government officials and farmers are putting in maximum efforts to wipe out Ipomoea. The root of the plant spreads on the top soil, survives on wet and dry lands, roadsides and rail lines. As flood irrigation is practised in this area, Ipomoea is carried through channels and spreads faster to the fields.

Ipomoea has already taken root on an estimated 2,000 kilometres (km) land stretch in the Cauvery delta. According to A Sambantham, Thanjavur's deputy director of agriculture, all the five tributaries of Cauvery - Vennar, Vettar, Cauvery, Vadavar and Arasalar - have been completely covered by Ipomoea. Accumulation of silt and mismanagement of water bodies have become a common feature in this area and hence unknown plants and weeds, like Ipomoea and water hyacinth, have flourished.

T Murugaian Maza-varayar, a progressive farmer at Keeza Uloor in Orathanadu Taluk, says that his land is constantly waterlogged due to Ipomoea overgrowth. Following this, about one ha of ADT 36 paddy plant worth of Rs 30,000 was waterlogged in mid-1996. "We could not harvest even a single paddy straw," Mazavarayar says. The weed is a nightmare for fish-breeders too as it grows fast and covers water bodies like tanks and ponds. This is the reason why yield is declining in the region. Ipomoea does not spare the dry areas either. In west Thanjavur, near Sengipatti, 24 ha Kada Eri (tank) and 70 ha Rayamundan Eri have been completely encroached by the weed.

Tank water is the main source for irrigation in drought-prone districts such as Pudukottai and Ramanathapuram. Ipomoea invades not only water bodies but also cultivable fields and marginal lands, says S Chandrasekharan, director of Renaissance, a non-governmental organisation (NGO), based at Pudukottai. This NGO, with the co-operation of the local community, removed Ipomoea in the entire Talanayar block of Nagapattinam district and a part of Pudukottai district.

The weed invades arable fertile regions quickly by sucking nutrients. An integrated method is being worked upon to remove the weed from the Cauvery delta. S Kunjithapatham, former joint director for agriculture, says that the area covered by water hyacinth has been surpassed by Ipomoea in Cauvery delta. An estimated Rs 8 crores have been allocated for removing Ipomoea in Thanjavur, Thiruvarur and Nagapattinam district during 1997-98, he says.

K V Sundaram, assistant director of agriculture in Pervurani taluk, has devised a method to get rid of the weed. A portion of the Ipomoea's bush is removed and a group of 10-15 labourers cover it and roll it like a mat. Not more than Rs 5 per square metre is paid per labourer. If the labourers are organised and work at the community level, the weed can be wiped out from the entire Cauvery basin within a week's time, says Sundaram. He says that it is easier to remove the weed from the wet land as the soil is lose. The dried leaves and twigs are used as fuel in firewood-deficit areas.

Poor people in rural areas collect the weed for fuel. But the smoke that is emitted irritates the eyes. The School of Energy Management at Bharathi-dasan University, Tiruchirapalli, is examining the usage of Ipomoea as a source of energy.

Scientists have found that Ipomoea compost contains sufficient nutrients like nitrogen, phosphorus, potassium. Five-and-half tonnes of decomposed manure is sufficient for one ha of wet-land paddy cultivation. Scientists at Soil and Water Management Research Institute of Tamil Nadu Agriculture Univeristy, Tanjavur, say the preparation of Ipomoea compost does not involve too much by way of technical and financial inputs. Chopped pieces have to be placed in a pit with 100 grams of pluerotus fungus for better decomposition.

Says K Krishnamurthy, former vice chancellor of University of Agricultural Sciences, Bangalore and an expert in weed sciences, every plant has some useful property. Congress grass that was earlier considered to be a dangerous non-native weed, has today, proved to be a good source of raw material for card board boxes. In the same manner, detailed research is required to find out the useful properties of Ipomoea.