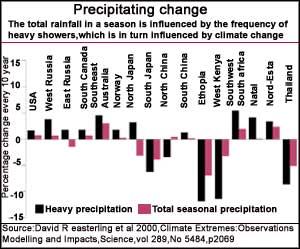 this is a message for all those who use an umbrella during the rains: ensure it is made of sturdy stuff. In the future, the rain is going to be intesnse. The hot days are sure to be scorching and the cold ones freezing. The extremes of climate are poised to spike higher in the years to come. The effect of these extremes will impact more than just your umbrella.

Scientists and researchers agree that changes in frequency and intensity of extreme weather will have profound impact on human society and natural resources. In 1988, hurricane Mitch caused over 10,000 deaths in Central America. Since 1987, more than 360 extreme events have caused loss of over us$5 million each. Hurricane Andrew alone has wrought damage worth more than us $30 billion in 1992 in the us (Science , Vol 289, No 5484).

Climate extremes can be placed into two broad groups. One, extremes observed in climate and weather statistics, such as daily temperatures and annual rainfall. Two, more complex weather events, occurring randomly, including hurricanes and droughts. Observing patterns in these events, coupled with mathematical modelling, helps put a figure on the projections as well as attribute the changes to specific climate forcing process like increasing greenhouse gases (ghgs ).
Global mean temperature is a statistic that falls in the first group of classification. It has increased by 0.6C since the start of the 20th century. The mean has risen because of an increase in the daily minimum temperatures recorded and not the daily maximums. A study conducted in the us shows that the frost-free season in the northeastern us has occurred, on an average, 11 days earlier in the 1990s than in the 1950s. Another analysis done in the us, shows that the number of days when temperatures dip below freezing levels in the us have reduced slightly. In Australia and New Zealand the daily minimum temperatures have also risen and the number of days below the freezing temperature has reduced.

Another important measure, particularly for human health, is 'apparent temperature'. Apparent temperature combines the effect of temperature and humidity on the body. The apparent temperature too has increased, on average, across the us. I ncrease in water vapour content in the atmosphere is partially responsible for this increase. Studies make it clear that for every country where frost days have been examined, they have become fewer in number. This is consistent with the increase in the minimum daily temperatures. But other statistics, like maximum temperature extremes do not show consistent trends.
The character of rainfall is also changing with time. In the us, the number of days with rainfall above 101.6 millimetre (four inch) and 50.8 mm (two inch) has increased since 1910. And the increases in extreme climate events, in the us are most responsible for the 5-10 per cent increase in the total annual precipitation since the early 20th century. In fact, in most countries that experienced a significant increase or decrease in monthly or seasonal rainfall also experienced a disproportionate change in the amount of precipitation falling during the heavy and extreme precipitation days.

The overall area of the world affected either by excessive rains has increased. But there is no clear trend of tropical storms or hurricanes. The number of intense hurricanes, though, has fallen from the 1940s.
To study the effects of increased ghgs, simulation models have been developed. The results of the climate models back up the voluminous data gathered from observations. For example, some climate model simulations show that increase in ghgs causes increased surface heating. Consequently, the atmospheric moisture increases, increasing the precipitation rates. These simulations confirm what has already been studied and observed. The models predict decrease in the diurnal temperature range, warmer mean temperatures, decreased extreme cold and increased intensity of rainfall. Recent studies also corroborate studies conducted before the second assessment report of the Intergovernmental panel on climate change's. The studies are in agreement on the following facts:

Also, some current simulations show that the Pacific region is experiencing a shift towards an El Nio-like climate pattern and a change in the sea surface temperatures (ssts). It is predicted through the simulations that the extremes caused by El Nio would produce more evaporation proportionately and more intense rains in the central and eastern Pacific with even less rainfall in Australia.

But there is little agreement among the climate models concerning the possible future behaviour of storms around the mid-latitudes and changes in their intensity and frequency. A few studies forecast an increase in the number of deep cyclones and increase in intensity of the storms over western Europe. Additionally, some global climate model studies suggest the possibilities of more intense tropical cyclones in the future. However, one of the biggest problems in determining whether extreme events have changed in character and that these changes are consistent with what the simulation models show is that researchers use different criteria to define an 'extreme climate event'. This problem coupled with some others makes it difficult to oversimplify and say that extreme events, in general, have altered. But all the studies are unswerving in associating some of the changes in climate observed with increase in ghgs.


It is certain that with the continuing increase in ghgs in the 21st century, the losses caused by natural calamities and catastrophes are bound to increase. In the us, losses caused by natural calamities have increased from about us $100 million per year in the 1950s to about us $ 6 billion per year in the 1990s, with a record number of damaging storms in the 1990s. Crop hail insurance losses, a good way to measure the impact of hail and wind, have also grown in the us from an annual us $ 30 million in the 1950s to us $ 320 million in the 1990s. The migration of people to storm-prone areas and increase in population are as much a reason for this increase as increase in weather extremes. In the coming years, the situation is bound to exacerbate.

The impact of change in weather and climate patterns has been felt by a broad spectrum of floral and faunal species. Many of the biotic changes observed have been predicted earlier by global warming studies. Earlier studies comprehensively document that climate changes affect species population, distribution, morphology and behaviour. One reason for strong effects on the biological processes is that they undergo change at particular temperature thresholds. Any change in these temperatures can alter physical characteristics as well as range of distribution of species. In western North America, one species of butterfly, Edith's checkspot butterfly, has shifted its range northwards by 92 km, closely matching the mean temperature isotherm's (an imaginary line joining up places on the map with same temperatures) shift northwards by 105 km. The direct link between societal and biological impacts and climate change is difficult to make. But the weight of the evidence suggests systematic global increases in both the frequency and impact of extreme weather and climate conditions.