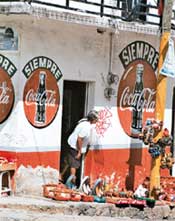 A World Trade Organization (wto) panel has ruled that Mexico violated global trade regulations in a long-standing soft drinks dispute with the us.

In 2002, Mexico levied a 20 per cent tax on drinks that are sweetened with anything other than cane sugar grown in Mexico. Before the tax, Mexico was the biggest market for us exports of high-fructose corn syrup.

us said the tax discriminated against their sugar imports. The panel supported us claims that the tax was a breach of international law. It added that the tax was unjustified under wto rules and also under the North American Free Trade Agreement (nafta). nafta too, has called for duties on a handful of products, including sugar, to be eliminated by 2008.

But Mexico insists that its measures are in line with trade rules. It will continue to take necessary measures to protect its sugar sector regardless of wto's decision, unless an agreement is reached with the us.