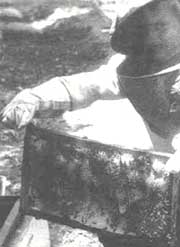 TRADITIONAL honey hunters in India have so far relied on crude methods for gathering honey which mainly involves lighting a fire under the hives to drive out the bees. The honey is then manually squeezed out of the combs. While this technique serves the main purpose - gathering honey - it leads to the destruction of the entire bee colony, which in turn hampers cross pollination in agricultural crops, forests and other vegetation.

A scientific method for honey collection has now been developed by the Centre of Science for Villages in Wardha, Maharashtra and tried out in various areas where the rock bee - Apis dorsata - which contributes to about 70 per cent of India's annual honey production, flourishes (Technology Models for Rural Application, Department of Science and Technology, 1995). Water is first sprayed at the beehive which not only wets the wings of the bees preventing their free movement, but also lowers the temperature in the hive. A person in full protective clothing then climbs up to the hive and separates the two chambers - lower brood chamber and upper honey chamber - of the hive from each other. A simple contraption made from bamboo not only prevents the chamber holding the bees from falling to the ground, but also allows the bees to rebuild the honey chamber without having to disperse from the site.

The detached honey chamber can be cut into desired shapes and hung vertically over a wire gauge support in a steel box with a glass lid known as the solar honey separator. The box is placed in the sun, the heat of which dilates the cells of the comb allowing honey to trickle down into a collector. Proper organisational backup could make this new method of collecting honey a profitable enterprise.