Revenue loss projected at over Rs 5,000 crore by industry body 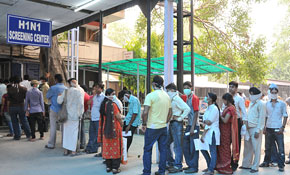 As Rajasthan and Maharashtra reel under the outbreak of swine flu, assessment by an industry body shows that it will adversely impact tourism of the two states. The loss is expected to be to the tune of Rs 5,500 crore for tourism and aviation industries. Till February 15, swine flu had claimed 153 lives in Rajasthan and 51 in Maharashtra. Total number of people who have died of swine flu in India is 485.

According to an Assocham release, Rajasthan would be the worst hit state, which attracts fairly a large number of foreign tourists during the winter season, beginning November-December and running through the first week of March. With the festival of Holi falling on March 6, for which the western state receives a lot of people from abroad and other parts of the country, early March was set to see a boom in the two industries. The state government itself has issued notices cautioning the tourists against the disease.

In the winter season, roughly 200,000 foreign tourists visit the ‘golden triangle’ of Delhi-Agra-Jaipur (and other Rajasthan cities), accounting for about 30 per cent of the total number of the inbound traffic in the country. According to official figures, about 800,000 foreign tourists, arriving at the Delhi airport, head for the Golden triangle.

Maharashtra, including Mumbai, attracts second most number of foreign tourists in winter. Even though there is no official notice to the tourists, the news of widespread swine flu in the state has hit the traffic of tourists.

“The outbreak of swine flu in Rajasthan and Maharashtra must be dealt with on a war-footing both by the Centre and the state government as the disease is assuming epidemic proportion,” Assocham said. The industry chamber said that as much as Rs 4,000 crore could be hit only on account of the net foreign exchange earnings while the secondary losses could add up to Rs 1,200-1,500 crore more.