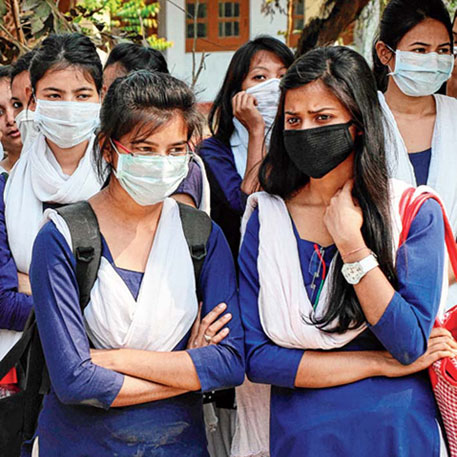 A sudden spurt in swine flu cases, including four deaths, in the north-eastern part of India has spread panic in the region, even as there is a mad rush to procure masks, which are selling at a very high price of Rs 100.

As of now, cases of swine flu have been detected in Assam, Nagaland, Mizoram and Manipur, but all the other states in the region have put their respective health departments on high alert to detect and tackle swine flu cases.

Assam and Manipur have reported two deaths each.

R O Budnah, nodal officer in the directorate of health services of Meghalaya, said that surveillance officers are monitoring the situation in every district of the state and are sending reports on possible cases of swine flu, and added that as of now there has been no case of swine flu in Meghalaya.

Similar is the case with Tripura. “We are fully alert and ready to deal with swine flu in the state,” said Tripura Health Minister Badal Choudhury. The Arunachal Pradesh government is also not taking any chances, and the state government has issued directives to all the districts to be on alert.

Meanwhile, the Congress-ruled Assam government has come under attack from Congress MLAs as well as opposition political parties and various civil society groups over the issue of selling of face masks at high prices.

After the detection of the swine flu cases and deaths in Jorhat, the town was struck by a panic situation.

As there was a mad rush for masks, these were selling at Rs 100 instead of the normal price of Rs 5.

Jorhat MLA Rana Goswami, who is a member of the Congress, took up the issue with the state government. Speaking to Down to Earth, Goswami said that the people of the town are panicking as a result of disease and taking advantage of the situation, the masks are being sold at high prices even at unauthorised shops.

Jorhat deputy commissioner Solanki Vishal Vasant said that the health department teams were checking pharmacies and unauthorised shops to curb black marketing. “Strict instructions have been issued to stop these malpractices,” he said.

Speaking to Down to Earth, Assam Health Minister Nazrul Islam said the state government started taking precautionary measures as soon as the first few cases of swine flu were reported from the western states.

“ICU wards at all the medical colleges and civil hospitals have been kept reserve for swine flu patients,” Islam said.

Caught on the backfoot, Assam Chief Minister Tarun Gogoi has directed the health and family welfare department to work on a mission mode to contain the spread of swine flu in the state. “Though the disease has not taken the form of an epidemic in the state, we are not taking chances and the health department has been instructed to work on a mission mode to put its men and machinery to control the spread of swine flu,” Gogoi said. All the hospitals in Assam have been asked to keep all the facilities available to face exigencies arising out of swine flu.

Meanwhile, on March 13, the Assam Human Rights Commission (AHRC) issued notice to the chief secretary of Assam to submit a detailed report within two weeks as to what steps have been taken in order to tackle, control and contain the outbreak of swine flu.