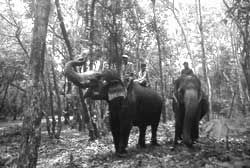 to curb the menace caused by straying pachyderms, the Jharkhand government has floated a national tender inviting experts to formulate a plan to drive away elephants from areas inhabitated by humans. State forest minister Yamuna Singh said that the forests of Saranda, Porhat and Kolhan will be surrounded by electrified wire and a plantation drive would be launched to provide fodder for elephants. A Rs 68-lakh project will be initiated to create a natural habitat for elephants so that they are confined to the forests. In recent times, the depletion of forest cover, fodder crunch and the animals' fascination for mahua have resulted in increased human-elephant conflict.