Shark tissues show the promise of preventing tumours from regenerating 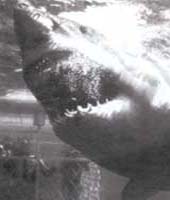 FOR the first time sharks may have to play the role of lifeguards for humans. An extract from shark tissues will be tested on cancer patients later this year. The extract, called squalamine, could help in cutting the blood supply of the tumours. The extract was discovered in the stomach of Squalus acanthias (dog fish) by researchers working for Magainin Pharmaceuticals, a biotechnology company based in Plymouth Meeting, Pennsylvania (New Scientist, Vol 154, No 2079).

Trials of the drug are expected to begin in autumn, in patients with brain or breast cancer. The idea is to use the drug to mop up stragglers after treatment and prevent a relapse, rather than as a primary anti-cancer drug.

In tests on animals with human tumours, company researchers found that squalamine starved the cancer of blood by preventing them from developing their own blood supply. This process of developing a blood supply, called angiogenesis, is essential for the growth and spread of invasive cancer from small tumours, and also enables fragments of a cancer left over after treatment to grow again. The company hopes that squalamine will prevent the fragments from rebuilding blood vessels and thus stop the cancer from returning.

Tumours generate their own blood supplies by secreting chemical signals that order healthy blood vessels nearby to build new channels that connect to them. The signals from the original tumour tell endothelial cells, which line the neighbouring blood vessels, to divide and from the new vessels.

Squalamine appears to stop this happening by making endothelial cells too acidic to divide. It does this by blocking a docking point, or receptor on the cell surface. This, in turn: disrupts a pumping system which gets rid of excess acid in the cell. "When squalamine hits the receptor, it shuts down the ability of this pump to excrete acid from the endothelial cell," says Jay Moorin, the chairperson of Magainin. This prevents the cell from obeying orders from the cancer to divide.

Moorin thinks that humans may have cell receptors for squalamine, because we make similar substances in our bodies. He says that in sharks, squalamine might be important for preventing damaged cartilage, which forms the shark's skeleton, from calcifying.

He doubts whether cancers will develop resistance to squalamine, which often happens with conventional anti-cancer drugs because the substance acts on the cells of existing blood vessels, not on cancers themselves. And virtually no toxic effects have been seen in the animals that have received the drug.