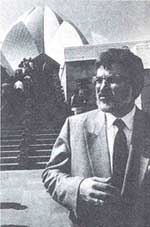 Fariburz Sahba, the Iranian architect who designed the, Baha'i Lotus Temple in New Delhi, is a sad man today. Dust and emissions from vehicles and industries around the temple are causing its marble exterior to peel off. Though the architect says the temple, made from the finest marble -from Athens was built to last 1,000 years, the current pollution levels in Capital portend an early death, for the monument.

Officials of the Archaeological Survey of India (ASI) say the plight of Sabha's monument is shared by others sprinkled around the Capital. "More than 100 monuments in Delhi are falling prey to pollution and dust," says B R Mani, superintendent archaeologist in ASI. "Recently, we spent a lot of money in cleaning the marble domes of the Red Fort. The marble dome of Safdarjung's tomb has already been discoloured beyond, remedy." Although the ASI recently went in for the time-consuming and etxpensive task of scrubbing monuments clean, the regular use of chemicals to wash off soot could eventually corrode marble grains.

Sabha after consulting the Italy-based Marbi Vincentini 'who had cut and shaped the marble for the Lotus Temple, said the only remedy was to wash the building water water every month and after the rains.