A new material could enhance the capacity of the information superhighway 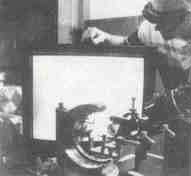 People may soon be able not only to choose from hundreds of television channels, but also use their television and telephone,sets to arrange for a telecast of their favourite movies to watch immediately or store for later viewing, and even receive airline schedules, news and catalogue shopping information whenever they desire.

Researchers at the US-based Oak Ridge National Laboratory (ORNL) have developed a new material that raises hopes of realising the scenario described, by making it possible to speed up communication and retrieval of information even as the number of users increases. Preliminary studies indicate that the new ORNL material, could pave the way for much greater and extensive use of the emerging Information highway, the scientists claim (Oak Ridge National Laboratory Review, Vol 27, No 3).

Rodney McKee Fred Walker at the ORNL's Metals Ceramics Division have developed a new class of optically thin ceramic film 'waveguides' for transmitting waves of light. The waveguide consists of a chemical, barium titinate, deposited one-atom layer at a laser beam time, on a crystal of magnesium oxide. Their studies have also shown that the waveguide material can be deposited over silicon, which serves as a support structure for components such as laser diodes and microcircuits because of its purity, crystal perfection and other electronic and physical properties.

The scientists are now trying to develop an optical switch consisting of silicon on which is deposited magnesium oxide, the barium titinate waveguide, and appropriately figured electrodes. "Switches using this type of waveguide could increase the amount of information carried by the fibre optic cables by over 100 times," McKee says.