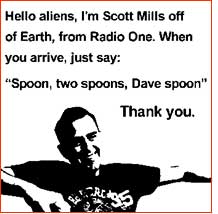 On October 2, the social networking site Bebo teamed up with an expert in radio communication, Alexander Zaitsev, to beam 500 messages from users into space.

Zaitsev used a Ukrainian radio telescope, normally used to identify and track asteroids "that pose a threat to the Earth", to beam the messages to a planet orbiting the star Gliese 581c. The planet is 20 light years from the Earth.

The Message From Earth project, which began on August 4, invited Bebo users, celebrities and politicians to submit messages and pictures that "consider the planet from a fresh perspective and raise awareness of environmental pressures on our planet". Some 500 photos, drawings and text messages were transmitted. "I understand that in the majority of cases these messages are naive, but I also hope that we will receive a creative look at the subject soon," Zaitsev said.

Not everybody was impressed.Seth Shostak, a senior astronomer from the Search for Extra Terrestrial Intelligence Institute in California, told the BBC "Whether aliens who might receive the messages would understand them is beside the point. The point might simply be well, here we are. We are clever enough to build a radio transmitter to reach you."