Teak companies are all about broken promises 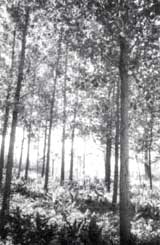 MONEY grows on trees, especially teak trees. This concept made headlines in the early 1990s in India. The idea was to get people to invest in teak trees, which would be harvested in 20 years. The profit that would accrue from the harvested tree would then be shared with the investor. "Teak companies", one of which was Chermai-based Anubhav Plantations, promised investors with returns that were much more than what fixed (cash) deposits or real estate had to offer. This prompted thousands to invest large amounts of money in these projects. Thus began the boom in teak plantations.

However, with scores of new companies coming up and the teak trees not maturing as promised, the entire business of plantations came under scrutiny. Experts in the plantation business for a long time suspected the activities of these companies. "We suspected these people because they made exaggerated claims and promised phenomena] productivity," says Sushil Saigal of Centre for Promotion of Wasteland Development. "How can get good quality tea one in 20 years, when a teak tree usually takes at least 30-40 years to mature?" asks V N Mishra, managing director, Centre for Promotion of Wasteland Development.

"It is a big racket. The operational strategies of the plantation companies are the same," says Mishra. "It is a two-way exploitation. These new companies buy degraded land from the poor villagers at a throw away price through agents and then sell the land to the investors. Both ways they are in profit," he says.

Besides, says Saigal, the plantation companies claim to use drip irrigation, fertilisers and other scientific methods to grow the trees. Even if these methods help the plants mature by 20 years, it would be sapwood instead of timber, he says.

The quality of a tree depends upon how close knit the rings in the main body of the tree are. The tighter they are, the better the wood. Dependence on artificial methods lead to formation of rings at a distance from each other, affecting the quality of the wood.

Experts allege that many of these plantation companies have actually nothing to do with plantations. According to Saigal, many plantations are just cover-ups to get agricultural income tax benefits.

"These people are more like a bank than getting into real forestry," says Saigal. According to Mishra, it is money invested somewhere else in the name of plantations.

December 15,1998 Down To Earth Just when experts had started questioning the modus operandi of these teak plantations, the Rs 100-crore Anubhav Plantations, a division of the Anubhav Group of Companies, was caught in the red. The crime: not refunding matured funds to a large number of its investors. Anubhav group's managing director C Natesan then did the vanishing act until he was arrested in Chennai. Subsequently, offices of the Anubhav group in several states were closed, leaving thousands of investors in the dark. Now, the group has proposed a compromise scheme.

The company has promised that all interim payments in the third and fourth quarter of 1998, 1999 and the first three quarters of 2000 will be paid on October 1, 2000, with an interest of 12 per cent per annum. Whether or not Anubhav comes out clean from this mess, it remains another instance of robbing the citizenry of their savings.