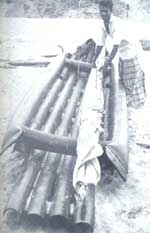 IF ONE were to visit the beach along Inchampakkam, a fishing village off the Madras-Mahabalipuram highway, one would see, amongst the wooden catamarans, a few black plastic ones.

Catamarans made from high-density polyethylene (HDPE) are becoming popular in Inchampakkam and its nearby villages, despite their high price -- between Rs 20,000 and Rs 22,000. A traditional wooden catamaran costs between Rs 7,000 and Rs 10,000.

The Shri A M M Murugappa Chettiar Research Centre (MCRC) at Madras, which has designed and fabricated the HDPE catamaran, has now undertaken a project under the auspices of the Council of People's Action and Rural Technology (CAPART) to popularise it. HDPE is suitable for making catamarans because being more dense than water, it floats. The only other plastic with this quality is polypropylene. But, unlike HDPE, it cannot be made from alcohol.

Catamaran (kattumaram in Tamil) literally means logs tied together. Being floaters, they can be launched from any beach and do not need a jetty or harbour. There are gaps between the logs, through which the water that is thrown up drains out. There are an estimated 40,000 catamarans in Tamil Nadu alone.

Unfortunately, the life of the wooden catamaran is greatly reduced by marine animals like borers and barnacles which destroy the wood. The new catamarans will not face this problem as these animals cannot attach themselves on to the HDPE pipes. Also, the friction of HDPE on sand being less than that of wood, pulling the catamaran in and out of the sea becomes a single man's job. At least two persons are needed to move a wooden raft.

HDPE catamarans can also be insured, which the wooden ones cannot because they are not single entities, but bunches of logs. "Our catamarans," says Joseph Thomas, assistant director at the MCRC, "are welded together, so they form one unit. An identification number can also be branded on them."

The MCRC's first model, though, was designed on the lines of the traditional vessels. The pipes were sealed at both ends and they were tied together using wood and nylon rope. But since the rope did not eat into the plastic, as it did with wood, its exposed surface had to withstand greater pressure and gave way easily. So, in the later models, the ropes were welded with the pipes. Another modification is the twin-hulled raft, called saras. It can carry more fisherfolk, and it can be fitted with an outboard motor.

There are fears in certain circles about the efficiency of the HDPE catamaran. The state fisheries department reportedly finds it too light and fears it might capsize more easily, and being smooth, the occupants may slip out of it.

However, Manoharan, a young fisherperson at Inchampakkam, dismisses these fears as baseless. He thinks the HDPE raft is safer since there is no danger of the rope giving way mid-sea. The final word is yet to come from the Indian Institute of Technology, Madras, where the raft is undergoing hydrodynamic tests.