Uncertainty over payment and short time frame keeps developers away 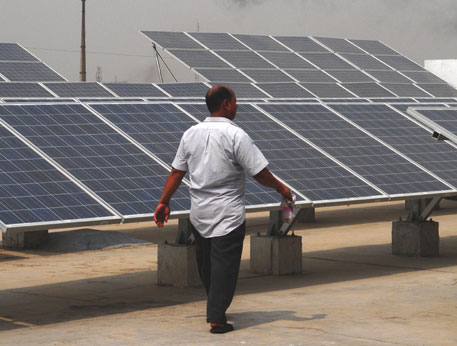 In a rush and flurry, Tamil Nadu has pushed out the state's first solar tender for 1,000 MW, enough to give electricity to about 2 million people in the power-starved state. But prospective bidders have expressed interest for only 499 MW, spread over 90 projects. The tender was released on December 5, 2012 but the draft of the power purchase document, the actual contract, was put up on December 26 with a call for bids by the January 4, giving a very short time for developers to make up their mind. This resulted in the solar tender attracting fewer bids than expected. Compare this with the last bid on the national level, which had seven times more bids than the capacity for which tenders were invited.

So far, only the technical bids have been opened and no bids for tariffs will be made available until prices are negotiated between developers and the state, which is one of the reasons some developers have stayed away.

Vineet Mittal, managing director of Welspun Energy, a solar power developer based in Mumbai, states that the vision was grand “but the tender was flawed and convoluted.” “With a better tender, we could have bid to make the largest solar power park in the world in Tamil Nadu. Now, instead, we have only bid for 30 MW. You can't have both a bid and a negotiation; you have to choose one or the other," he adds.

The Tamil Nadu Electricity Board (TNEB) is heading the bidding through its subsidiary Tamil Nadu Generation and Distribution Corporation (TANGEDCO) with a set deadline for solar plants to be up within less than a year, by the end of this year. TNEB has already accumulated losses of over Rs 53,000 crore, which has got some in the solar power sector worried about getting paid. Madhavan Nampoothiri, director of Resolve Energy Consultants, a Chennai-based solar consulting firm that has been involved in the bidding, says the state power utility is already very poor, and wind-developers have waited over 14 months to get paid. He agrees that solar power developers, therefore, might be shy to invest without proper guarantees. Mittal states that the major problem with the bid was the inadequate payment security mechanism, and because of the issues with wind power developers not being paid it would take a very strong guarantee of payment to make banks willing to invest in solar power projects in the state.

As Down To Earth reported earlier, Tamil Nadu released its solar policy in October 2012  with a new mechanism, putting the burden of solar on industry and other high-tension consumers of power. With no technical burden put on the ailing state power utility, it surprised much of the industry to see such a quick move by it.

Power utility in a fix

TNEB's solar tender works on a bidding model where everyone puts in a bid for a solar power tariff to be recieved for each unit produced over 25 years (with an escalation of 5 per cent per year for the first 10 years). TNEB will then take the lowest bid, called L1, and try to “negotitate” the other bidders into accepting that. However, with fewer bidders than capacity offered, TNEB is now in a difficult position. It can either let each developer have the tariff they bid, as the developer would have little incentive to move down in price with no competitors threatening, and at least call the bid process a half success, or it can cancel those who won't agree to L1 and perhaps come out with much less than half of the hoped-for capacity. Nampoothiri says Tamil Nadu will probably only get 100 or 200 MW to sign up and that many firms may have quoted too high a tariff. “Many will not go down to the price the utility wants," he adds. Mittal agrees. Sixty to 70 per cent of the 499 MW of capacity will not sign contracts, he says, while adding the developers would have wanted better assurances of payment coming in on time than was given.

As for the short time span given—projects have only ten months to be completed—Madhavan states that small one or two megawatt projects will have no trouble finishing by December but larger ones will have it harder. Still, he belives that the majority of plants will be up on time. Mittal, on the other hand, says it may be difficult as it takes six months just to secure financing and that "Tamil Nadu had signalled that it wanted global players to come in to make the state a forerunner in solar, but giving only one month to secure land means the bid was mainly for local companies."

Nampoothiri believes that TANGEDCO will have to accept what it can from this tender and launch a new one to fill the remainder. He hopes to see a division between large and small projects in the next tender: "Plants of small size: 1-5 MW can't compete in price with larger plants that take advantage of the economics of scale, there should be different tenders for small and large plants."

Tamil Nadu is not the only state in advanced stages of solar power plans. Andhra Pradesh has held a pre-bid meeting in the middle of December last year discussing an upcoming bid for 1,000 MW of solar power in the state. Rajasthan has re-launched its tender for 200 MW after withdrawing it earlier in the year with a new deadline to submit tenders by January 11, 2013. Kerala has launched a programme to set up 10,000 solar rooftop systems, not connected to the grid, totalling 10 MW in all, and so far over 4,000 customers have signed up for the programme.