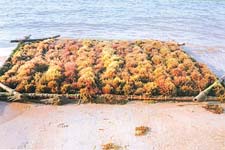 a seaweed from Japan being cultivated in Tamil Nadu is being promoted as the source of the best salt for blood pressure patients. Scientists at the Central Salt and Marine Research Institute at Bhavnagar, Gujarat, have found a process of extracting potassium chloride as a by-product of Kappaphycus alvarezii, the red-coloured seaweed.

The weeds have some tissues instrumental in the accumulation of potassium chloride in the plant. When the tissues rupture, the salt is released. As the plants are dried, the salt covers the plant. "We tested the salt that is left behind and found only potassium chloride and sand. We decided to do something with the salt," says Ghosh. It is cost-effective because it was a by-product of a thickening agent they were making, he added.

The institute has patented another salt--a mixture of potassium chloride and sodium chloride--from a different halophytic plant. It has developed a technology to produce this from the biomass of Salicornia brachiata--used for extraction of oil. This salt contains 5-8 per cent potassium chloride and 5 parts per million of iodine. The technology has been licensed to a local entrepreneur in Gujarat, who is selling it as salt for blood pressure.

"We can increase the salt's iodine content. But since this will not be sold as iodised salt, that isn't necessary," Ghosh added. Although it is expensive (Rs 96 per kg), the salt has a niche market.