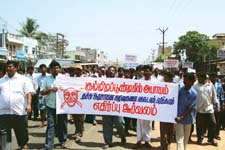 on march 23, 2007, 500 local people stopped work at the landfill and incinerator site in Gummidipoondi, Tamil Nadu, fearing the work would affect agriculture and water table in the area. Despite the protest work resumed on the landfill on March 26 amid police protection.

Work first started on this site in November 2005, but it had to be stopped due to rain. In January 2006, work started again. Though the local people approached police against the work, it did not help. Later, they filed a petition in the Madras High Court and the court issued a stay order. In December 2006, the court lifted the stay because issues pertaining to hazardous wastes have to be dealt by the Supreme Court. Reacting to the judgment, villagers have recently filed a petition in the Supreme Court.

Ramky Enviro Engineers Ltd are the developers of the landfill. According to Shweta Narayan of Community Environmental Monitoring, an ngo, the landfill construction is illegal since the mandatory permissions were not sought from the Panchayat Union Council.

But K S M Rao, director of the company, differs, "We had applied for the permission but decided to proceed when we did not receive a response within 25 days, as stipulated. We were anyway following the Principles of Abundant Caution and the Precautionary Principle."

Besides, according to Narayan, the environment impact assessment (eia) report prepared by the company found the site unsuitable because of the high water table and porous soil.

But Rao denies this, saying that, according to their eia, the water table was at 5 m.

According to the regulations, a landfill can come up in an area where the water table is 2m, which means a landfill could come up in Gummidipoondi, he says.