International pressure and indigenous ingenuity notwithstanding, the Tamil Nadu leather industry is reluctant to cure itself of its callousness 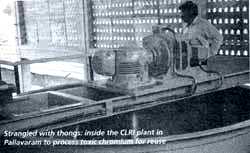 DESPITE the Madras-based Central Leather Research Institute (CLRI) coming out with a package of clean technologies for the Tamil Nadu leather industry, in built resistance from small tanners and economic non-viability continue to blunt the impact of such efforts.

Pressure from major importers like the us, Germany, France, Italy and the UK to adopt.green technologies is compelling the reluct4nt industry to clean up its act. The Tamil Nadu tanneries account for about 70 per cent of India's leather exports, which stood at Rs 41,393 million in 1993-94. The executive director of the Council for Leather Exports, P Prabhakaran, says, "We have to adjust and eliminate or reduce the use of certain chemicals which are found to be environmentally harmful."

A handful Of CLRI projects have either been recently inaugurated or are about to become operational. According to K Parthasarathi, assistant director and chief of tannery at the CLRI, these projects "will curb environmental pollution caused during the tanning process". But the major problem lies in identifying the harmful chemicals involved in the process. Says M Mariappan, deputy director and head of the environmental technology department of the CLRI, "Chemicals used in the process vary in range and quality. They come from several sources and there are no fixed parameters for input chemicals. We need regulations to precisely spell out the constituents for leather chemicals."


There is pressure to phase out the use of ammonium chloride for the de-liming process.Ammonium chloride Pressur4 increases nitrogen levels in major the air and water, not only like the causing respiratory problems for humans, but also Germar increasing water toxicity Italy an through increased nitrification. A pilot plant at to adop Tejoomall's Tannery, us technoling carbon dioxide (C02) instead of ammonia, is compready in Pernampet near the relu Ambur. The plant has been funded by the United industrj Nations Industrial Development Organisation (UNIDO). Trials commenced in September this year.

Austrian UNIDO expert Karl Munz, who is overseeing the says, "co2 removes the lime A and the grain is cleaner." But I Khanna, advisor to several 'promtanneries, says, "The small man does have the money to put into such nologies." While ammonium chi costs Rs 3 to 3.50 per kg, C024 times as much.

There are several other pro areas in the processes involved in manufacture of leather producm starts with the soaking or process, where salt is used to the raw material. When this salt is charged, it leads to salinity. But steps are being taken to reduce quantum of salt by first allowing, it ooze out naturally and then introd mechanical desalting by using a rated drum, which removes 30 per of it. Such a demonstration centre already been established by the cuu in Pallavaram-Chromepet in Madras.

Another chemical specially targeted is the environmentally-dangeroqn chromium, which is used extensiv in the process. Forty to 60 per cent of the chromium is fixed to the material but4 the remainder is discharged as effluent. The CLRi has initiated another Jilot project in Pallavaram to recover chromium for reuse. In this process, the waste chromium is made to reac:'t with magnesium oxide and sulphuriei acid, yielding crystalline chromium which settles down in the brine and can then be separated and reused. The CLRi now plans to commercially market this technology.

Another contentious issue is the use of soul from phides in the liming 2orters process for the removal of FS, hair and other unwantedproteinous matter. Sul. France, phides increase the bio the UK logical and chemical oxygen demands in the efflux green ent. Again, the CLRI has lies developed an enzyme. clarizyme, which ensures fing that optimum levels of ant sulphides are used in the process - down from the clean present 3-4 per cent of weight of the skins to 2 per cent or less.