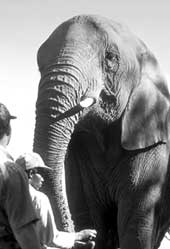 The Tanzanian authorities seized more than a thousand elephant tusks stolen by poachers at the Dar es Salaam port recently. According to the police, two Tanzanians had been arrested following the haul of 1,255 tusks in two suburban homes. However, it is not clear where the tusks had originated. Poaching in ivory continues unabated despite a decade-long international ban on its trade.

"As long as a market for ivory exists, it will sustain poaching and illegal trade," said the International Fund for Animal Welfare's (ifaw) southern Africa director, Jason Bell. "The black market demand for ivory is insatiable," said an ifaw statement.

Although the African elephant is not considered an endangered species, its population has declined substantially from two million in 1970 to an estimated 450,000-600,000 today.