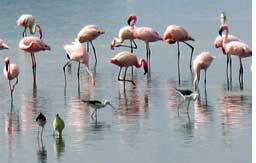 Conservationists argue the move will not help because the plant will continue to extract water from lake. The lake is the breeding ground for about three-quarters of the worlds lesser flamingos. Tata Chemicals in collaboration with the Tanzanian government plans to extract water from lake Natron to produce soda ash for industrial use (see Bird hit, Down To Earth, September 30, 2007).

The Lake Natron Consultative Groupan umbrella group of environmental organizationfears that the industrial extraction will affect the delicate mineral balance in the lake, killing the algae which the lesser flamingos feed on. It says the flamingos could become extinct in five years if their habitat is destroyed. ndc on the other hand is trying to prove scientifically that the lake has renewing ability and industrial extraction will not affect it ecology.

In a temporary reprieve, the plant was put on hold in November 2007 when the Tanzanian Government asked Lake Natron Resources (a firm jointly owned by Tata Chemicals and the Tanzanian government) to produce a new environmental management plan and consider other sites for soda ash extraction.