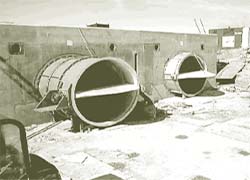 the world's first commercial wave power station has been established on the Hebridean island of Islay in Scotland. The power station known as limpet (land-installed marine-powered energy transformer) began supplying power up to 500 kilowatt from 20 November, 2000. The station has been established jointly by Wavegen, world's leading wave power developers, and Queen's University, Belfast, with the European Union's support. The station will be supplying power to major public electricity suppliers in Scotland for the next 15 years. The one million pound power station is a result of 10 years of research. The station comprises a wave energy collector and a generator. The system will last for 60 years and will require minimal maintenance. limpet will enable wave power to become a major source of renewable energy.