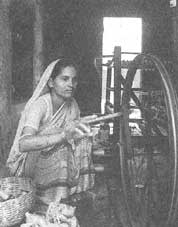 Silk has joined carpets on the list of Indian industries that are frowned on in the West because of the extensive use of child labour. The Germans first voiced complaints against the carpet industry, and now the Swiss are taking aim at silk-weaving.

The Swiss, who in partnership with the World Bank are partly financing the Rs 550-crore National Sericulture Project (NSP) to improve raw silk production, expressed concern at a recent meeting with Indian silk board authorities that child labour is increasing in the silk industry and this may lead them to withdraw their support. As if to assert their seriousness, the Swiss Development Corp representatives joined World Bank officials in rejecting an NSP request to extend the time-frame of assistance to the project, scheduled to be completed by 1994-95.

L C Jain, a veteran Gandhian and an exponent of textile handicrafts, branded the Swiss-World Bank threat as "brutal and illiterate" and warned that crippling the silk industry will cut the income of adult workers and thereby force their children to work more.