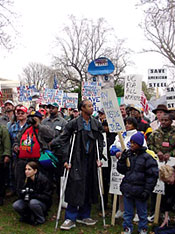 reeling under a spate of unfavourable rulings in the World Trade Organisation (wto), the us was dealt yet another blow when the dispute settlement panel ruled recently that tariffs imposed on imports of certain steel products were illegal. Although the decision is an interim one, such rulings are rarely reversed. The final report is expected to come out soon.

In March 2002, the us administration had slapped a 30 per cent tariff on most steel products imported from Asia, Europe and South America. This was a safeguard measure to help the domestic steel industry consolidate and restructure itself for competing in international markets. It was applied following the recommendations made by the us International Trading Commission (usitc). Following a detailed investigation, the commission determined that "such increased quantities of imported products into the us posed a substantial threat to the domestic industries." Currently, a debate is raging in the us on whether it is necessary for the government to withdraw the measure.

The protectionist step was taken against the backdrop of a sharp dip in domestic steel prices due to cheaper imports from other markets. Leo Gerard, international president of United Steelworkers of America, a group representing the us steel industry, claims the dip in prices resulted in the bankruptcy of 37 companies and left 54,000 steelworkers jobless. Criticising the wto ruling, he said that its findings are "an unalloyed assault on the sovereignty of the us ".

Robert Pritchard, president and chief executive officer of A J Rose Manufacturing Company, spoke on behalf of the Consuming Industries Trade Action Coalition: "The resultant increase in steel prices due to the tariffs has raised costs for processed steel product manufacturers, making their goods more expensive in the international market." The two made these statements at a congressional hearing on the impact of the tariffs. The hearing coincided with the wto 's interim verdict.

Following a request made by the Committee on Ways and Means of the us House of Representatives, the usitc is now expected to examine the state of the us steel-consuming industries as a result of the tariffs imposed. usitc is supposed to present a report to president George W Bush by September 19, 2003.

Notwithstanding this debate, the us is expected to take the fight to the Appellate Body of the wto if the final report of the panel does not reverse its current decision. Confirming this, Grant Aldonas, commerce undersecretary of the us, said: "When the report is made public, it will be seen that the panel has essentially eviscerated the wto Safeguards Agreement."