Tartaric acid in, aluminium out

A NUMBER of farmers lose their crops because of acidic soil. It increases solubility of the naturally occurring aluminium, leading to aluminium toxicity. Aluminium toxicity usually damages the roots first; they tend to be shortened and swollen. Aluminium also inhibits the uptake of calcium, an essential plant nutrient. 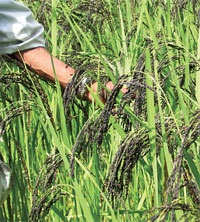 Use of ammonium-producing fertilisers (like urea) contribute significantly to soil acidity. Up to 70 per cent of the world’s potentially arable soil is acidic, including regions in the US and large areas in Asia, Africa and South America, according to Leon Kochian, plant physiologist at U.S. Plant, Soil and Nutrition Laboratory in Ithaca, New York. Acidic soil also decreases significantly the concentration of other important minerals, like calcium, magnesium and phosphorus, rendering the soil infertile.

Farmers traditionally add lime to the soil to deal with acidity and improve soil productivity. Hydroxide produced from lime (calcium carbonate) reacts with aluminium to form aluminium hydroxide and water. This neutralises soil acidity. But this solution has several drawbacks. One is over-liming that can harm plants. It is most likely in soil deficient in organic matter and clay. Two, lime is expensive. Many farmers in developing countries can neither obtain nor afford it. Three, it is difficult to place lime deep in the soil, so excess aluminium might still lurk where long roots can reach.

Their study showed significant improvement in the dry matter and root volume in rice. Pal and Datta studied the influence of tartaric acid on aluminium dynamics and toxicity in a greenhouse pot culture. They grew rice plants in increasing aluminium concentrations and two levels of tartaric acid in highly acidic soil.

Analysis of the soil solution showed formation of aluminium- tartaric acid complexes, which decreased aluminium ion concentration and consequently toxicity. “Tartaric acid will be affordable to the poor farmer in India,” said Pal who received the Young Scientist Award at the 98th Indian Science Congress held in Chennai this year, for the same research.

Another study in China has shown that the use of tartaric acid reduces the concentrations of heavy metals in contaminated soils. “Since tartaric acid easily forms elemental complexes and is also environment friendly, further research might prove it a promising candidate for decreasing the concentrations of other toxic compounds in the soil,” said Yahogi Zhang of the Institute of Applied Ecology, Chinese Academy of Sciences, Shenyang. The study by Yahogi and colleagues was published in Journal of Environmental Science in 2006. Tartaric acid is present in banana, grape and many other plants.