Those with a sweet tooth might want to read on 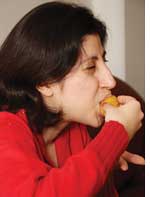 can one be undernourished after living on a healthy diet which includes plenty of vegetables and fruits? New research says one can. Phenoxy-herbicides, chemicals that kill weeds, also manage to get absorbed by crops and enter water supplies and the human food chain. These pesticides and drugs called fibrates that treat type 2 diabetes can block the functions of certain taste receptors, lowering the bodys absorption of carbohydrates.

This might be good news for obese people because lower the carbohydrate absorption, lower is the deposition of body fat. But for people who try to live healthy by keeping their sugar intake under control, such low absorption is not desired.

The receptors that respond to the taste of sugars are called the type 1 taste receptors. Of these, T1R3 is the receptor which is inhibited, found a group from the Monell Center and Mount Sinai School of Medicine in usa.When consumed food is rich in carbohydrates, the taste buds are activated. They ask the brain to initiate the release of gut hormones which direct the absorption of carbohydrates. In this way they also contribute to glucose metabolism.

Only the tongue was known to contain this receptor. Later, scientists found it on the endocrine cells in intestinal and pancreatic walls of humans. This got them thinking that maybe it was more than just a taste receptor. Most safety tests are done on animals and the T1R3 receptor is found only in primates. So the effect was not observed in lab mice.

What led the scientists to suspect the drugs in the first place can be traced to a drink of coffee. Coffee beans contain a molecule called lactisole which blocks sweet taste receptors. Extracts have traditionally been used in curing diabetes and obesity. The interesting part was the similarity in the structure of the lactisole molecule and the drugs.

The fibrates block sugar absorption from the gut and seem to lower chances of obesity. But more studies need to confirm its role as a future drug. The long term effects of the herbicides are also unknown, similarly. There is far less information about the physiological role of this receptor on the endocrine cells, so we do not know how important its role is as the sweet receptor, said lead researcher Bedrich Mosinger. The study was published on October 9 in the Journal of Medicinal Chemistry.