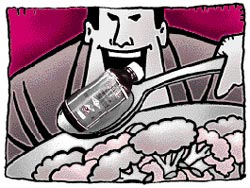 it is poison and yet it is on dinner plates everywhere; even at home. This is so despite everyone knowing about the harmful effects of chlorpyrifos -- a pesticide that can easily enter the human foodchain. Now, a study paints an even more scary picture -- exposure to the pesticide can lead to abnormal foetus development. The study, conducted on pregnant rats by researchers from the North Carolina-based Duke University and the us Environmental Protection Agency (epa), also indicates that the effects are more adverse during the later stages of pregnancy despite minimal exposure to the chemical. Moreover, among other things, the offsprings have lesser amounts of brain and liver tissue.

Similar research work and the fact that the pesticide fails to meet epa safety standards, induced the us in June 2000 to phase out or eliminate certain uses of the harmful chemical. For instance, epa has restricted its use in agriculture by banning its application during the post-bloom season. Using it for home gardening has also been prohibited.

Even the uk is planning to phase out the pesticide. However, other developed countries like Italy, France and Germany are still using the pesticide on a large scale. In total, 129 countries worldwide are using the pesticide, according to California-based Pesticide Action Network. But it is the developing countries that account for its maximum usage. It is being used in South Africa to protect banana plantations. In Sri Lanka, it has been recommended for use after two other insecticides were banned. The pesticide is also used extensively in India. During the year 1999-2000, it was the fourth most used pesticide in the country -- around 4,300 metric tonnes of chlorpyrifos was used to protect rice, pulses and vegetables. The result: high levels of the pesticide's residues are found in many agricultural products. During a study, New Delhi-based Indian Agricultural Research Institute found that out of the 86 vegetable samples tested, 62.8 per cent had residues of chlorpyrifos. Out of these 5.8 per cent had residues above the maximum residue limit. For example, in some vegetable samples, the researchers found that residue limit to be 0.89 milligramme per kilogramme -- much higher than the allowed limit of 0.05 milligramme per kilogramme.

However, the government is not taking any steps to phase out chlorpyrifos. Experts fear that with developed countries like the us banning its use, multinationals would dump the pesticide in India. "The us-based multinational Dow AgroSciences was aggressively marketing the pesticide during the Indo-Chem 2000 chemical fair, which was held in New Delhi immediately after epa decided to phase out chlorpyrifos," says P M Bhargava, former director of the Centre for Cellular and Molecular Biology, Hyderabad. The company is now producing the pesticide at Chiplun, Maharashtra.

This is alarming considering the fact that from 1984 to 1994, Dow AgroSciences hid hundreds of medical reports about adverse health effects associated with chlorpyrifos exposure that they were required by law to report to the epa. "Our pesticide laws formulated in 1968 are outdated. Ill-effects of chlorpyrifos were not known then. The government should now stop its production. We should not be victimised by multinationals," says Satinath Sarangi, convener of Sambavna Trust, a Bhopal-based non-governmental organisation. This is even more important at present as Dow has recently merged with Union Carbide -- the company responsible for the Bhopal gas tragedy. "On the basis of scientific data, the government should have phased out the pesticide along with the us," says Anil K Gupta, Centre for Management in Agriculture, Indian Institute of Management, Ahmedabad. Moreover, some experts opine that the government should carry out India specific studies about the adverse effects. "This is a must, as the pesticide functions differently in different climatic conditions," says Swati Y Bhave, consulting paediatrician at the Apollo Millennium Hospital, New Delhi.

According to Bhargava, it is vital to disseminate information about health hazards posed by the pesticide. He is trying to create awareness about the same among farmers through advertisements published in regional languages. More importantly, ecofriendly alternatives should also be made popular. Nematodes and bacteria are said to be safer alternatives for agricultural purposes. Experts assert that chlorpyrifos would soon become a major threat if such suggestions are not given due attention.