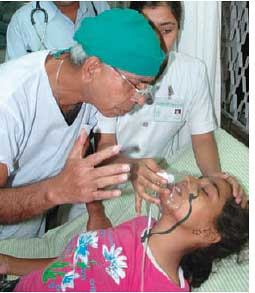 chlorine leak at a private residential area in Jamshedpur affected about 300 residents on May 27. The cause of the leak was traced to Tata Motors dumping an unused chlorine cylinder, once used by its water treatment plant, in the vicinity of the housing colony about 10 years ago. The chlorine started leaking after the cylinder rusted and its walls gave away due to the pressure of the gas.

The neighbourhood houses employees of the automobile giant. Although the residents didn't protest, the state government has sprung into action. This has taken the company officials by surprise. "The leak happened because of laxity of the Tata Motors authorities. Guilty officers should be prosecuted," said Jharkhand Chief Minister Madhu Koda. "It's not a joke that a cylinder containing toxic gas was left in the open," said Koda who has ordered to lodge an fir against the officials responsible for the incident. Some arrests have already been made. "We have arrested the in-charge of the water treatment plant and the company's safety in-charge. The district administration and the district pollution control board are conducting separate enquiries," said Ravindra Kumar Agarwal, deputy commissioner of East Singhbhum. The state has also issued showcause notices to the pollution control board and the inspector of factories. Speaking to Down To Earth, S B Borwankar, head of the water treatment plant, said: "We admit our mistake. Definitely, somewhere there is a fault of the management. The company will conduct a thorough probe and will try to nail the culprits. We will also upgrade our toxic gas and material handling and storage facilities." According to Borwankar, the company had stopped using the gas at its water treatment plant about 10 years ago and is using bleaching powder and other safe chemicals for water purification.

The incident has also highlighted flaws in the district administration's disaster management mechanism. "Since East Singhbhum houses major industrial units such as Tata Steel, Adhunik Steel, Lafarge Cement, Tata Pigment and Tinplate, it's imperative to have a disaster management cell that can take prompt action during such industrial mishaps," says Agarwal.