On an average, diabetes is responsible for two per cent of total deaths in India 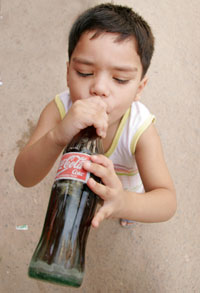 A tax levy of 20 per cent on sugar-sweetened beverages (SSBs) like soft drinks can help reduce obesity and diabetes, says a new research. The provision, if put to practice, can curb problems of obesity and overweight in India by three per cent and can reduce diabetes by 1.6 per cent in the next decade.

The SSB tax can help to prevent obesity in 11.2 million Indians and Type-2 diabetes in 400,000 people from 2014-2023, concludes the study led by Sanjay Basu of Cardiovascular Institute, Stanford University, US. The research, published on January 7, 2014 in the journal PLOS Medicine, also says that the proposed move will save 3.9 million youth from becoming overweight.

According to World Health Organization (WHO), nearly 13 per cent of Indians are overweight or obese and the country is home to 62 million diabetics. By 2030, the figure is expected to rise to 79 million, which is expected to be much more than that in America (30 million) and China (42 million) within the same period.

On an average, diabetes is responsible for two per cent of total deaths in India. Reducing non-communicable diseases, especially diabetes and obesity, is therefore crucial to the country. Doing this by taxing harmful and unhealthy products has been debated for a long time across the globe.

Levying SSB tax or “fat tax” on food items that make one fat will increase their prices, in turn decreasing the consumption and reducing the risk of obesity, diabetes and other related diseases. Denmark and New York have used this method to make an effort to shift from an unhealthy diet pattern to a healthy one. Denmark increased excise duties on chocolate, ice cream, sugary drinks and confectionary by 25 per cent in 2010 and introduced tax on foods containing more than 2.3 per cent saturated fat, such as meat, cheese, butter and edible oil, in 2011.