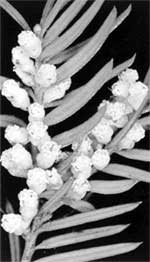 the Himalayan yew (Taxus wallichiana), a rare tree found in the Himalayan foothills, is fast disappearing because of largescale illegal felling for an anti-cancer drug made from its leaves and bark. The tree parts are allegedly smuggled to laboratories in the us, Germany and other Western countries involved in research on taxol, a resinous substance extracted from Taxus.

For decades, Indian drug manufacturers have been using Taxus parts in various Ayurvedic preparations. "In Gulmarg as Taxus baccata (old nomenclature) is on the verge of extinction, the state authorities should think of its local cultivation," says S D Swatantra, chief conservator of forests, Jammu & Kashmir (j&k) .

T wallichiana is found in Kullu, Mandi and Shimla districts of Himachal Pradesh (hp) where it is called rakhal , in Gulmarg j&k and also in Uttar Pradesh (up), Andhra Pradesh and Tamil Nadu. The Gujjars of j&k who have been using Taxus leaves and bark since time immemorial for its pain-relieving and therapeutic properties, call it posteel.

T baccata -- its fellow varieties being the English yew, the Irish yew and the Pacific yew, the latter being used for anti-cancer drug in the us-- was reclassified as per international norms a year ago. In India, Taxus is reported to have been massively logged during the past few years. In November 1996, Parvati Valley, an hp district forest officer, seized 250 quintals of Taxus leaves from a godown at Bhuntar near the Kullu airport.

Presently, the hp government has granted licences to two parties from Mandi for commercial felling of Taxus trees and is charging a royalty of Rs 600 for every 100 kg of leaves. Local foresters inform that presently there are about 25 saw mills in the state engaged in Taxus logging.

Dabur India, the only manufacturer of taxol-based drugs in India, is producing two anti-cancer preparations -- 'Intaxel' which is directly produced from taxol leaves and 'Daxotel' (a semi-synthesised product). Dabur has its own plantations in up and in Nepal. The company has a factory in Nepal for processing Taxus leaves to obtain taxol. Bristolmyer, a us company too had plans to launch an anti-cancer drug made from taxol, but postponed them deeming the cost of production to be high.

The sudden upsurge in the logging of Taxus has generated concern in forestry circles about the plant's future. Says N S Chauhan, a scientist at Y S Parmar University of Horticulture and Forestry in Solan, "There should be a ban on cutting rare trees. There should be an immediate census of these trees."