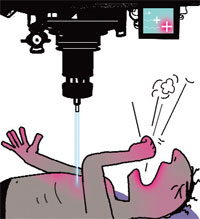 ABOUT 500,000 people in India die from tuberculosis (TB) every year. The disease can lie dormant in an infected person for years without showing any symptoms but those with weakened immune system, like HIV/AIDS patients and the malnourished, are likely to develop active and contagious TB. Current diagnostic techniques, including a series of blood and skin tests, and chest X-rays, can take four to 12 weeks to give accurate diagnosis of whether a person has inactive infection or active disease.

Rapid diagnosis to separate inactive from active is important because people exposed to the bacteria for a short period should not be subjected to the side-effects of TB drugs, according to Nisheeth Agarwal, assistant professor at Translational Health Science and Technology Institute in Gurgaon. “Indiscriminate use of TB drugs can give rise to multiple-drug resistant strains,” the expert added. Starting treatment as early as possible is also a priority as the disease progresses very quickly, he added.

The research team, led by Giuseppe Pantaleo of University of Lausanne, took samples of T cells of 300 patients diagnosed with inactive infection and active disease. T cells are the body’s army that fights different types of infection-causing bacteria, including a subset directed towards the TB bacterium.

The team characterised this subset using the polychromatic flow cytometry technique to differentiate between inactive infection and active disease. They then used a combination of antibodies against six different types of proteins.

When excited by a laser beam, these antibodies give different colours.

In patients with active disease, the researchers found, the T cells displayed two colours simultaneously, for proteins CD4 and TNF-α.

A double-blinded study carried out in South Africa corroborated this discovery. The technique was successful in detecting active disease in 80 per cent of the cases. The findings have been published in the February issue of Nature Medicine.

But the technique, Agarwal claimed, is not likely to be effective for those with compromised immunity, like people with HIV, since they have reduced levels of T cells to begin with. “It also appears to be expensive,” he pointed out.

TB is caused by Mycobacterium tuberculosis. The disease spreads thro-ugh the air, when a person infected with the bacteria sneezes, spits or coughs. The bacteria usually attack the lungs, but can also affect the brain, the spine and kidneys.