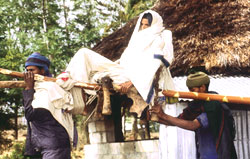 The scientists studied the response of human immune cells to tuberculosis bacteria. They found that the germs stimulate a set of receptors present on these cells. This triggers a set of reactions the cells produce an enzyme that activates vitamin d to manufacture a protein that can kill the germs.

Compared to fair-skinned people, those with dark skins have high levels of melanin the pigment that provides colour to skin. But melanin reduces the skin's ability to produce vitamin d. The scientists found that when exposed to the bacteria, cells cultured in blood samples taken from dark-skinned people produced about one-third of the microbe-killing protein produced by fair-skinned people. Supplementing the samples from dark-skinned people with a vitamin d precursor boosted the production of the protective protein. The study appeared in the online version of Science on February 23, 2006.

There have been no large-scale studies of the prevalence of vitamin d deficiency, which appears to be widespread among poor people throughout Africa, West Asia and South Asia. Data from the us shows that in 2004, tuberculosis rate among blacks was eight times higher than that for whites. The study also explains why exposure to sunlight which increases production of vitamin d is a common treatment .

A combination of food and supplements would be better than getting the vitamin from the sun as it is difficult to regulate and its harmful effects are well-known, says Robert Modlin, David Geffen School of Medicine at University of California at Los Angeles, usa, the lead author of the study.