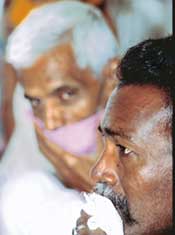 the problem of resurgence of tuberculosis (tb) might be blamed on the failure of its vaccine, for researchers have found that there is more than one strain of tuberculosis bacterium prevalent in different parts of the world. " Mycobacterium tuberculosis, the bacterium that causes tb is so genetically distinct in different parts of the world that tackling the disease could require separate vaccines for each region," say researchers in a study published in the February issue of Proceedings of the National Academy of Sciences.

At least two million people die of tb every year. The current vaccine, developed from just one strain, varies in its effectiveness depending on where it is used. Scientists blame it on environmental factors. But Sebastien Gagneux of Stanford University Medical Centre, usa, the lead researcher of the study, suggests the bacterium's genetic variability is responsible for the vaccine's variable efficacy. The study shows the Mycobacterium tuberculosis has evolved into six distinct lineages, distinct to human populations across the world. Researchers have accordingly classified them as: East-African-Indian, East-Asian, Euro-American, Indo-Oceanic, and two West-African lineages.

These different strains might use slightly different mechanisms to cause the disease, specific to individual population. Incidentally, most of the research on tb vaccine is carried out in Europe and the us, where immune response is different from the developing world. "People developing vaccines should thus work with different strains for different parts of the world," says Gagneux. The findings would have important implications for tuberculosis control and vaccine development.